We’ve now been in India for four days, however it seems like so much longer! Everything is very fast and full on over here. Soon after arriving at our hotel, the manager talked us into going on a tour around India, wich turned out to be a great idea. More about that later though. As part of the tour, we were given a driver and a car for a day around Delhi, so we spent our first day in the hectic capital city. First stop was the Red fort, very big, with very interesting temples and arcitecture. But the squirrels – Nobody told me that there were squirrels in India! Then we wandered through the Theives Market to the magnificant Mosque in the middle of the city. After removing our shoes (we have quickly learnt not to wear lace up boots when visiting temples or mosques) we climbed up the tallest tower to the tallest room where we found … the princess. No, not really, but it was a great view of the whole city. Not that we were all that impressed, after stumbling (clawing?) our way up umpteen flights of narrow narrow steps. Maybe the photos will turn out well… We spent the rest of the day looking at all the tourist spots, including the temple that is shaped as a lotus flower (looks remarkably similar to the Sydney Opera House) and parliament house. Last stop was a textiles shop, where Tash and I tried on sari’s. I’m still trying to decide if I should get one…

The next day we started our trip around Rajasthan, ending at Agra (Taj Mahal). We have a car and driver (Krish, very funny guy) for 13 days. On our first day we covered 280 km, which took a bit over 6 hours. The roads are full on. As Krish affectionally puts it (he’s from Delhi), “Delhi drivers are very crazy”. Of course, everyone is crazy to Krish. Cows walking down the middle of the highway (we saw our first cow wandering through the international airport carpark) are skillfully dodged, not only because they are considered a sacred animal, but also because they would make a bloody big dent in the car! Likewise, goats, chickens, sheep, dogs and children are scooted around, with a loud beeping of the horn to remind them that they probably shouldn’t be in the middle of the road. Camel drivers, buses overloaded with locals, trucks even more overloaded, motorbikes, bicycles and auto rikshaws (like tuk-tuks) also have to be negotiated. On seeing our first camel, loaded up with bags and bags of produce, I scrambled for my camera, but since seeing so many of them, I just smile…

Anyway, first stop was Mandawa, which was really just a chance for us to rest. The next day we stopped at Bikaner, where we saw all the compulsary temples, mosques, castles and forts. We also wandered around the markets, which were full of colours, smells and things to see. The stalls with bags and bags of chilli’s, spices and currys was amazing, you could taste the chilli’s, just from the smell. My eyes are still watering. Other stands had bags and bags of coloured powder, used in the ‘holi festival’, a festival where colour is celebrated. Even the sacred cows get smothered in colour… On our way to Jodpu, we stoped at Deshnok, to look at the ‘Karni Mata’ Temple – also known as the rat temple. Rats crawling all over our feet is an experience I’m unlikely to forget. We even saw a white rat, supposed to bring good luck. Yesterday we arrived in Jodhpur (the blue city). It is known as the blue city as, in the olden times, people painted their houses blue to signify what caste they belonged to. Nowadays everyone paints their house blue, in keeping with the old times. 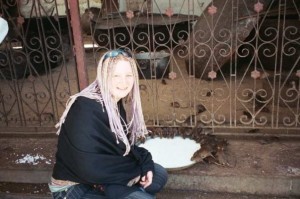 Today we visited the Mehrangarh Fort, set on the hill, overlooking the city. It was amazing. We were given little walkmans which gave us an audio tour of the fort, wic was founded in the 15th century. Apparently, when the fort was taken over from the original people, a curse was put on the place. They were threated with a lack of water, which is a big deal in this area (we’re surrounded by desert). The king asked his advisors what to do, and they told him that the only way to lift the curse was to give a human sacrifice. A brave man came forward (?? was pushed) and offered himself. There is a plaque where the man was buried alive in the walls of the fort. After the fort we looked around at some of the other sights of the city, including the city gardens, where monkeys roam around (really big, scary looking monkeys….) We also visited the local markets, which was fun, being the pedestrian trying to dodge all the ‘crazy’ drivers, cows and children! 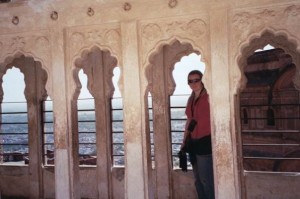 Audio Guide at the Mehrangarh Fort

Right now I’m contemplating dinner – the Indian food is great. Butter chicken or palak paneer – whatever we have theres sure to be heaps. They dont seem to believe in small portions here, we havent been able to finish a meal! Hope everyone is having a great time as we try and survive on the crazy Indian roads!!!