Well well well, hasnt been long since my last blog, but so much has been happening that I thought I should write it all down… We managed to catch our 14 hour train trip from Beijing to Xi’an, home of the Terricotta Army. Train trip was good, we were in a cabin with an older Chinese couple who went to bed as soon as we got onto the train (about the same time that Tash went to bed!). I stayed awake for a bit longer, chatting to a Mongolian guy who was travelling to Xi’an to go for a job interview. He had some really interesting views on life. At one stage, while waiting to go to the toilet another woman starting chatting to me, telling me all the good places to go to in Xi’an. Many many other people were happy to talk to me on the train, unfortunatley they didn’t speak English. However, when trying to communicate this, they obviously didn’t care and continued to chatter away to me in Mandarin!!!

On arriving in Xi’an, a group from the hostel that we’re staying at met us at the station. With them was another woman from our train who was to stay at the same hostel, turns out she was at the same hostel in Beijing with us! We all hopped on the local bus with our HUGE backpacks on, quite an effort, and ended up at the Bell Tower Hostel. Ended up sharing a room with Tracey, the girl from the train, really nice girl from Wales. Getting ready to go out for the day, we stepped out onto the street to find some food. Straight away a guy jumped in front of me and started snapping photos of me (no doubt because of my hair!), the first photo he took must have looked a treat, me completely shocked, with little sleep from the night before and just in general absolutley buggered!

We spent the day with Tracey, going to the Terracotta Army, an amazing place! About 30 years ago, a farmer who was digging a well found some statues buried in the ground. Come feel it was the greatest archeoligical find of the 20th century. 3 Large pits of terricotta statues have been uncovered, it is thought that there could be more, not yet discovered. The biggest pit is thought to contain over 6000 peices, including soldiers, horses, carts and weapons. They are believed to have been built over 2000 years ago, although there is some dispute over that. Really interesting site though.

That night we went out to a bar with Tracey. Turns out that whilst on the train, she met a group of guys and gals from Xi’an, who treated her as their guest all night, taking her to dinner and wining and dining her. One of the guys, Stanley, owns a bar in Xi’an, and he invited us out, so out we went! Upon arrival he started pouring our drinks, and didnt stop! The bar was awesome, made from old railway carriages, really interesting paintings and murials on the walls (he’s an artist as well, it turns out). After a couple of drinks at his place, he took us to another couple of bars, all the bartenders were shouting us too. Last stop was the Music Man, where we staying to the wee hours. Night was really good, only problem was that only Stanley and another girl, Jojo could speak English, so we were forever translating between them. And then we discovered that one of the other guys had been to Japan for 6 years, so I was able to chatter away to him in Japanese, it was great! We ended up getting back to the hostel at about 3am, late, but well and truly before the other people in our dorm room!!!

This morning we were all buggered (one of the other girls didnt get back until 7am!), so we slept in. At about 10.30, one of the girls that works at the hostel came barging in, saying “Bobbi, I have a surprise for you!”. Bit of a shock, we all sat up in bed, as I was given the morning newspaper with my photo in it! Turns out that the crappy photo that the guy took the other day when we had just arrived was in the paper! We spent today touring the markets and every second stall had the newspaper, so I had people shoving it in my face and pointing to it all day!! Who knew, I don’t have to earn millions to become famous, I just have to have purple put through my hair!!! 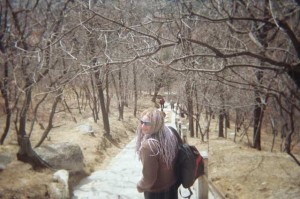 Me with my purple hair, scary!!!

One thought on “Being famous in Xi’an”