We’ve been on holidays these past few days – decided it was time to take some time off (… being a tourist in Edinburgh…) to be a tourist in Liverpool, home of the Beatles. Elysha is a huge fan, so off we jetted. Liverpool is an interesting town, used to be one of the bigger ports for England. Nowadays the port doesn’t get as much business, and you can tell. The town has a lot of deserted and run down buildings. On the other hand, Liverpool boasts a University with 70,000 students – pubs everywhere! Stayed in a fantastic hostel, after walking in, Tash pointed out the smell. ‘What smell’, I asked, immediently worried. Turns out she was happy about the lack of smell… Elysha was a bit disappointed over the lack of Beatles memorabilia (we brought all our souvenirs at the airport, better and cheaper!), but Tash and I thought it was tacky and great fun! Went on the Magical Mystery Tour – a tour bus that stops at all the houses where each of the Beatles were born, everyone troops out of the bus and takes photos of the houses and then troops back onto the bus. The poor people that now live in these houses – I feel sorry for the people who will eventually buy our house back in Toomuc Valley. Imagine all those people that will stop to look at the house because the famous Bobbi once lived there… hehe 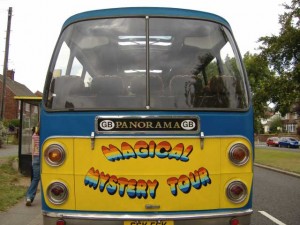 Apart from that, we’ve just been doing the same old same old. Elysha and I ventured out the other night to find some-where new to eat, ended up at a quaint little Italian restaurant, very cute, although the waiter left us a little perplexed. An Italian accent is hard enough to decipher on its own – try throwing a bit of Scottish into the equation as well, absolutely impossible! After dinner I tried a fried mars bar – didn’t need any vodka that night – I was well and truly high after the layers of sugar and fat. Not bad though 🙂

Totally used to life at the hostel now. Spend most evenings with the crowd in at reception, listening to music and talking general rubbish. The other night, one of the girls commented that when we all get home, we are going to wake up in the middle of the night and want to have a conversation about nothing – and have no-one to talk to. At the hostel, there is ALWAYS some-one awake, always some-one to talk to. Have mildly been discussing setting up a phone-club, so once we’re home we always have some-one to call in the middle of the night, to talk about nothing at all. Dealing with everyday things can be tough, I constantly dream about being back home, in my own kitchen, when finding a bowl for cereal is not an ordeal. Was eating brekky the other day, when one of my friends came in, and sat down. Placed his pint glass of tea on the table (no mugs left), and proceeded to take a handful of cornflakes from the box, followed by a swig of milk from the carton. “No bowls” he grumbled as he grabbed the paper… 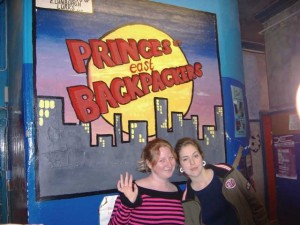 Elysha & I at the hostel

I’m nearly on the move again – I booked flights over to Ireland for the week after next, so excited. I’ll be flying over there, traveling for two weeks, then back to pick up the girls, then onto Paris. Woohoo!! Am madly planning out an itinerary for Ireland, will be flying into Dublin and out of Shannon. Must try and get to a good Irish pub and grab a pint of Guiness, yum yum. Wonder if there is a brewery tour for the Guiness brewery, or even the Kilkenny one? Must find out. If you know of anything I must do whilst in Ireland, let me know!