Edinburgh is gearing up for festival season, its amazing. I’ve slowly got used to the idea that I’m living in a tourist town, but now we are in the middle of Edinburgh’s biggest festival – or rather a collection of big festivals. The Fringe Festival, the Military Tatto, the International Festival, the Film Festival, the Literary Festival and a few others are running concurrently, meaning that there are performers and big names all over town. The Royal Mile is a delight to see, clowns and ‘robot people’ everywhere. Of course, its also great watching other tourists getting lost and confused – knowing our way around the city now we’re now able to laugh and point them in the right direction. Bagpipes are everywhere and every now and again you wander past a Highland’s band. On Sunday there was a parade on the High Street to celebrate the beginning of the Fringe Festival, lots of marching bands (mainly military ones, from the Military Tattoo) and floats. So many people lined the streets to watch, I haven’t seen so many people in Edinburgh (except, perhaps, when the protests were happening, but then it was almost all riot police).

One of the boys in our room had a nasty shock last night. Poor guy had just moved into our room, drank too much and passed out on his bed. At 3am the fire alarm went off and the hostel had to be evacuated. Tash and I jumped up and threw on our shoes, then attempted to get Nuffy up. He wasn’t having any of it, we finally rolled him onto the floor (off the top bunk, OUCH), where he continued to snore away. Whilst we were trying to slap him awake, some of the boys came in and just dragged him down the stairs, he woke up about 3 flights down. Luckily it wasn’t a real fire – just someone smoking in the wrong place. It’s the third fire alarm since I’ve been here, they don’t have false alarms, if it goes off the whole building is evacuated, and the fire brigade is automatically called. Interestingly, there is a hostel on the floor below us, and they never evacuate (even though they can clearly hear the alarms). I guess they figure that its just an activity our hostel enjoys, not one for them to join in to. There’s gunna be problems the day it is a real fire…

Apart from dealing with the hoards of people, not much else is new. We went and saw Charlie and the Chocolate Factory the other day, very fun. Of course had to get the compulsory hoard of candy before the movie, needless to say the four of us finished the GIGANTIC popcorn before the movie even started. Many of the people at the hostel are starting to move on now, so alot of our original friends are gone. Consequently, the hostel is a lot quieter, people reflecting what they are going to do, and people planning their next leg of their trips. It’s sad to see everyone go, but great to hear their plans and see another persons opinions about the MUST-GO places. 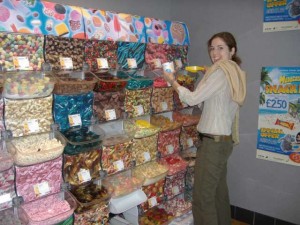 I’m off to Ireland tomorrow, so incredibly excited. I plan on staying in a castle, visiting the various breweries, going to see Giants Causeway and a heap of other things… Thanks to all for the help with all the advice on places to see, sorry to those who requested leprechauns, not sure I’ll be able to fit them in my luggage, but I’ll keep an eye out!