Merry Christmas to one and all – or, as we say it in Chinese ‘Shengdan Kuai Le!’. Christmas in Shanghai has been an interesting affair…

My friend Matt from Australia arrived last week in time for the weekend, and provided a great reason to go out and see more of Shanghai. So I finally got the chance (I’ve been sick for the past 3 weekends, so haven’t been able to go out with the Monash group) to go out in Shanghai at night. And what a night we had! We went to a club called BonBons, where entry is 80 kuai (about $13) a head – unlimited drinks. Unfortunately, they were a little too generous with the drinks (75% vodka with a dash of sprite and a sprinkling of ice), and the quality of the alcohol wasn’t the best – not a great combination, which lead to me taking a ‘sick day’ the following day…

We spent Christmas morning recovering from our late night the night before, and opening all the pressies that came via Australia from Santa… Bon-bons with kaluah certainly impressed everyone. A 9am wakeup call from Australia was not well received – 3 hours sleep is just not enough anymore. After being pestered by everyone else on the floor, we got up and headed off to the restaurant where we were to have lunch. And what a lunch – we were on a table with some of the more ‘interesting’ people on the course, but that didn’t deter us from enjoying the lavish Chinese Christmas lunch – bowls of noodles, rice, fish, mushrooms, sweet and sour dishes, black bean dishes, chilli dishes, you name it, we had it. After lunch, we headed off to Carrefour (supermarket) to work on Matt’s Christmas wish.

Which lead to Matt and I wandering down Nanjing Road – a street a little like Bourke Street Mall (for the Aussies) – dressed head to toe in Santa suits, giving out lollies to the little kids. The people of Shanghai didn’t really know how to take us – some kids came rushing up to us to grab lollies – some parents hid their children away from us. Then again, the ones that were scared by us might have had something to do with the fact that Matt’s pants kept falling down because the pillow he had stuffed down them (gotta look like a legit fat Santa :)) was a little too big. On top of that, all the normal hawkers trying to sell silly foreigners DVDs came racing up to us, started to say ‘you want dvd, i got dvd, you want watch, i got…’ got all confused and would just splutter before racing off again. Despite the lack of sleep, we had a great time, and I can now cross that one off my list: 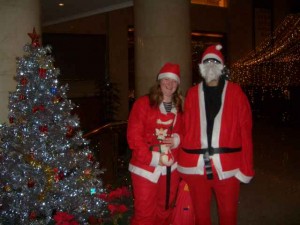 Well, that was the craziest thing we’ve done – for the rest of the week we’ve been sightseeing and exploring the area more and more. Matt took off on Thursday to Beijing and I’m left here to finish up my course. New Years Eve tonight and I’m absolutely wrecked (Bon bons again last night and a different club the night before), but it should be a good night. We are going out to an all-you-can eat steakhouse before we go out tonight, everyone (even the semi-vegetarians) are extremely excited… real meat!