And once again I’ve made it back to Japan.  Although not without a few tiny weeny little incidents.  These last couple of months have been so hectic that planning for this trip was left to the very last minute – literally.  I finalised accommodation details for my first couple of nights only 1 night before I left!  Problems for the trip began when, two days before my flight, I received a phone call from Jetstar.  “Eeek”, I though, “at least I have travel insurance”…  Turns out they had canceled my first part of my flight – the Melbourne to Sydney section – and so had booked me on an earlier flight.  As I’m not known for my awareness early morning, I begged them to put me on a later flight, which they agreed to.  Little did I know…

Wednesday morning saw dad and I at Tullamarine Airport awaiting my (first) flight.  When they began announcing that there were technical faults, I knew straight away I was to miss my connecting flight in Sydney to Japan.  Several hours later I finally got on a (new) plane, getting into Sydney waaay too late for my connection.  Qantas (it was a Qantas domestic flight) put me up at an airport hotel, which was fine by me, meant I got another nights sleep…  Bags hadn’t arrived yet, as they didn’t want to delay our flight any longer (so they said), they would come in on the 2pm flight we were told.  So we toddled off to the airport hotel with just our carry on bags.

Needless to say, the bags didn’t arrive that night.  When I went to check in the next day, my bags still hadn’t arrived, so I checked in, then went to the Qantas counter to beg for some vouchers to get essentials.  The guy at the counter asked if I’d checked the ‘baggage room’ – not one person had mentioned this in the numerous times I was on the phone the night before.  So off I went to the ‘baggage room’, where you have to knock on a blank wall three times, wait three minutes and knock two more times to be allowed entrance…  Wasn’t expecting to find anything – after all, I had been chasing the bag for nearly 24 hours, and assumed it hadn’t left Melbourne yet – however, sitting right on top was my familiar backpack.  “It’s mine!” I shouted with joy to the staff.  As I had already checked in, they promised to get it on my flight for me.

On the way to the boarding gate, I grabbed some deoderant and earplugs, because I had forgotten to grab some out of my backpack.  Although I had spent half the night thinking about what clothing I would buy at the airport, I bought none, as my bag had been found, or so I thought.  How wrong I was.  Flight was uneventful, I had 3 seats to myself, so I got a decent rest.  Arrival in Japan bought an unpleasant surprise – my backpack wasn’t on the flight.  About then is when I went into panick mode.  No change of underwear?   No pajamas?  I’m in Japan, where the average size is toothpick.  Eeek!

Much of the next couple of days were spent attempting to find clothing – although I did ok with some tops (surprisingly!) underwear and skirts eluded me.  In any case, I was sure that my bag was going to arrive “tomorrow”, and didn’t want to over-buy, just in case.  In Australia, mum was spending almost every waking moment attempting to locate my bags, screaming her head off at incompetent Qantas staff.  Amongst trying to find clothing, I have also spent a good amount of time trying to buy a mobile phone in Tokyo, a near impossible task. 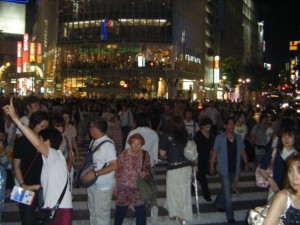 Never fear, my luggage did arrive, but not without dramas.  On my fourth day in Japan, I headed off to Hachijo jima, a hippy island an hour south of Tokyo.  After being assured by Qantas staff in Australia that my bag would be at Haneda airport, I spent an hour and a half trying to communicate with staff there, only to find the bag hadnt even left Australia yet.  But I was over it, I was heading to a tropical island…