Last week I decided to swing by my travel agent in downtown Fukuoka to see if they had any deals for travel to South Korea, as it is so close to Fukuoka, and I’ve never been. When I found a deal that included the return trip on a boat, and a night in a hotel that was cheaper than just the boat trip, I decided to grab it. As a result, 24 hours later I was speeding across the Korea Straight towards Busan on the JR Kyushu ‘Beetle ‘ hydrofoil…

As per normal, I had the normal issues travelling… Got to my local bus stop to see the bus leaving, even though I was 5 minutes early… Raced to get the bus, but it wasn’t until halfway to town I realised I had left my alien registration card (my Japanese ID card) at my apartment. They made a big fuss of it when I left Japan last time, but I decided I didn’t have time to go back and get it… Then the bus, which was supposed to go to the bus terminal (so I could change to a bus headed for the port) stopped at the station, and said it was going no further! Turns out when I raced for the bus earlier, I had jumped on the earlier bus, not the right one that went all of the way, so I had to try and find the bus terminal on foot. Everyone I asked didn’t know where it was, cos I was ages away from it… Finally found the correct bus stop and got to the port terminal, where I went through emigration with no issues – the girl asked for my ID card, but when I said I’d left it behind, she was fine with it. I suspect that if I hadn’t of spoken Japanese, there would of been problems.

The JR Kyushu ‘Beetle’ hydrofoil is a very small ferry that takes 3 hours to make the crossing between Hakata (Fukuoka, Japan) and Busan (South Korea). We were warned to keep our seatbelts on because they often “have to swerve quickly to avoid whales and dolphins”. I kept my eyes peeled, but didn’t see any. Did see a very interesting lighthouse as we were leaving Japan that was bright red and decked out as Santa for Christmas (complete with white beard and all). 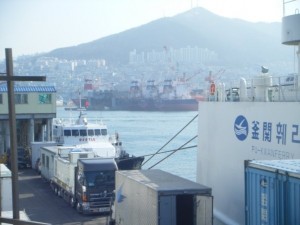 See the boat at the back (it says BEETLE)? That's the ferry that we crossed international waters in, only 3 hours, but still, it's tiny! The ferry at the front is the international overnight one from Shimonoseki (only 1 hour from Fukuoka).

When I mentioned to my Japanese friends that I would be heading to South Korea for a night, I asked them what there was to do in Korea – everyones response was “Shopping and food”, so I headed to Busan with a list of markets to find and foods to try. On arrival, I headed for the main train station, where I jumped on a double decker tour bus, which proceeded to take me around the city for only ₩10,000 (approx $10 AUD). I jumped off at Haeundae Beach to get some lunch (time to start crossing of the “food list”!). Surprise, surprise, at one of the most touristy spots in town I ended up munching down on good ol’ Aussie burgers, not a Bimbimbap restaurant in sight. Wandered around the area for a while (saw the Fish Car – a small car near the aquarium that has been turned into a fish tank, with large colourful fish swimming through the steering wheel and gearstick). 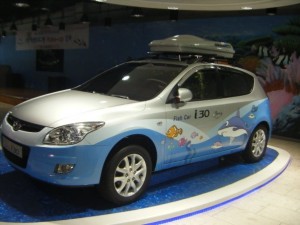 Checkin to my hotel was quick and easy – upon discovering I spoke Japanese, communication went from haltering English to fluent Japanese. Helps of course that I was staying in the Japanese part of town, in a Japanese hotel, but still much better than attempting to communicate in my non existent Korean (but perhaps my next language to learn?). My day finished up with a Korean barbeque for dinner, recommended by my hotel as “cheap and delicious”. And they weren’t joking, at only ₩12,000 (approx $12 AUD) for a huge amount of quality beef, kimchi and beer. They didn’t bat an eyelid when I came in on my own (despite Korean barbeque being a shared dish), and the owners mum helped me sort out the barbeque. I have never had real Korean barbeque before, it is eaten quite different in Korea compared to Japan – a long piece of beef on the barbeque was cut up into pieces (by the amused owners mum when she realised I had no idea what I was doing), and then dipped into sauce. Kimchi is added (all of the various bowls around the table are kimchi) on top, and then eaten. And, if you’re like me, and the owners mum is amused by you, she will put all of this together for you and basically spoon-feed (chopstick-feed) you!

On my second/last day in Busan, I headed out to fulfill my shopping component of my list. Busan is famous for it’s Jagalchi Fish Market, but having been to the world’s largest fish market in Tokyo, I wasn’t particularly interested in seeking out this one. Despite my intentions, I ended up at the fish market whilst trying to find another market. The fish market was surprisingly clean and not too smelly, and I saw plenty of interesting sights, including tanks upon tanks of sea snakes, and octopus’s making a run for it in the street. I eventually found the Gukje market, but didn’t buy anything, as I’m going to China soon, and much of the stuff at the market was similar to the things I usually see in China. Had bimbimbap for lunch (another tick on the “food list”) at ₩4,000 (approx $4 AUD), which was much spicier and tastier than other versions I have eaten in Japan and Australia. My day ended with me wandering back to the ferry terminal, where I caught my speedy boat back “home” to Japan.

I’ve just begun to start thinking about my Christmas shopping, how’s everyone else going?!

One thought on “Eating Korean Barbeque… IN KOREA!”