My original plan was to head to Kending from Kaohsiung, but a glance at the maps suggested this might make the day really rushed. The manager of the hostel instead suggested a small “cultural bus tour” of the Hamasen area instead, which the tourist centre at the station failed to suggest to me. At only $30 TWD (about $1 AUD) for the day of travel, this seemed like a great deal.

And so I headed to Sizihwan MRT station to check it out. I found the bus stop, and a bus sitting there with its door closed. I was just about to knock on the window to try and figure it out when a girl came over to me and asked if I wanted to do the cultural tour. She turned out to be one of the leaders, and set me up with a map and a pineapple cake (famous in the Kaohsuing area).

To be honest, I’m not entirely sure what I saw on the tour. We went to the old train station (the area used to export incredible amounts of bananas to Japan, and the railway was used extensively for this) as well as some old buildings (including the old Japanese consulate), the ferry terminal, the university and a few more. Despite not understanding much of what was going on, it was fun to hurdle around the streets in the bus, and see what was going on down in the back streets. 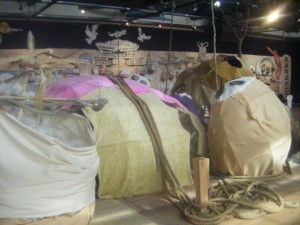 The ticket allows you to get off on and on the bus, so at the arts centre I did exactly that. Wandered around the centre for a bit, which had some pretty funky modern displays. Back out on the street, behind the arts centre I found a long bicycle lane way which had the strangest statues, man and woman couples, each set painted crazy colors and patterns. Following that for a while, I noticed a big warehouse with an admission ticket window and plenty of young people lining up. No idea what to expect, I paid my admission and entered… 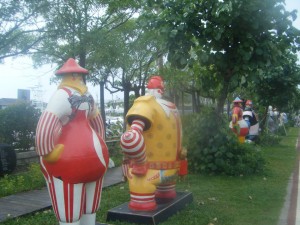 It was an interactive art exhibition, called “trick pictures”. Large murals had been painted onto the walls and floors, with an interactive spot for a person to jump in and take a photo. For example, there was a surfboard painted half on the floor and half on the wall, with crashing waves on the wall behind. By standing in the right spot and having your photo taken, it almost appeared as if you were surfing. There were probably over a hundred pictures, all with instructions on how to best take a photo, and stacks of people having a great time! 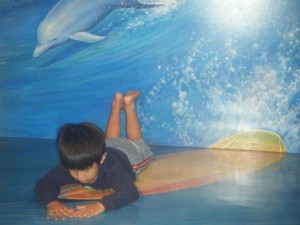 You can see the 3D-ness of this photo - the painting goes from the wall down to the floor, this kid was taking advantage of the situation!

Caught a whopper! Next to the girl is a little sign explaining just how to take the best photo.

I’ve bought my train tickets (encountered my first and only Taiwanese person who was not a kind and patient soul at the booking counter – grrr!) and I’m off to Green Island tomorrow 🙂