… and so it is that I am now renting my very first apartment, all by myself. Well, kinda.

Matt and I arrived in Fukuoka with our first two nights of accommodation booked, with the intention of finding an apartment straight away, or at the very least a cheaper hotel (Osaka was full of them, couldn’t be that hard, right?). Wrong! Fukuoka does not have cheap business hotels, the hotel we had found was the cheapest there was (and it was still a fair bit more than the hotels in Osaka). We spent our fist couple of days wandering around, determined to stumble upon a cheap hotel. In reality all we achieved was an amazing number of blisters and a thorough understanding of the backstreets of Fukuoka city. We quickly realised we needed to book a few more nights at our current hotel, but were only able to book 1 more night – the next night was the beginning of Obon. “Ahh, it’s ok, we’ll just have to pay a bit more at another hotel”, we thought. Wrong! The whole town was booked out. 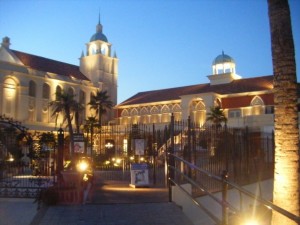 Ikeda’s to the rescue! Luckily for us, my host family from Kurume was more than willing to put us up, and so we headed out to Kurume. Whilst in Kurume, we were fed the most delicious foods by my host mum and my host sister Sawako helped us in our search for an apartment. She took us back into the city, to a company that rents furnished apartments by the month (not a common practice here), and helped us sort out an apartment. Our apartment finder was Chinese, so between the limited English, Chinese and Japanese, we all communicated, and we now have a place to live. 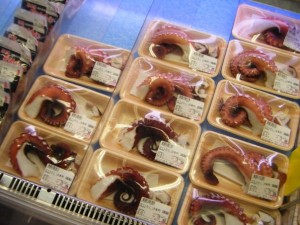 Octopus for sale at the supermarket

After the apartment searching was done, we have a few days to lap it up at the Ikeda’s before venturing out on our own. As it is so incredibly hot over here (not so much hot, but humid), we haven’t really been stirring before dark. But after dark I took Matt out for bike rides around town, showing him all the places I used to hang out as an innocent 15 year old exchange student. A lot of the places are still there, but the town itself has changed considerably – the biggest change would have been “Ichi-Ban-Gai”, the main shopping strip – a new super mall has opened up on the outskirts of town, and as a result Ichi-Ban-Gai is all but dead, empty shops and not too many people about. Wednesday came about, bringing with it the opportunity to join Naoko’s calligraphy class with some of the ALT’s (foreign Assistant Language Teachers) from Kurume. As usual I started out with good intentions of what to write, by the end both Matt and I were drawing pretty little pictures with our calligraphy brushes. 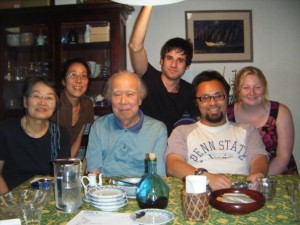 Having dinner with Chris, an ALT from my time

On Thursday we headed to Kitakyushu to where Sawako is living, to see the fireworks festival. The festival has been going for quite a few years, and involves fireworks going off from either side of the bay. The fireworks themselves were deemed “short” by my host dad – they only went for 1.5 hours! After the fireworks, we headed back to an izakaya – a small hole in the wall bar – to chat to the bar tender about potential jobs in the area. Not many available it would appear… 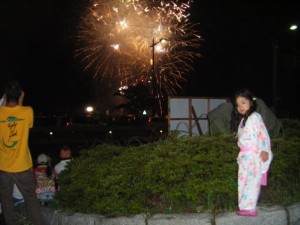 Little girl watching the hanabi in her yukata

Sawako helped us move into our new apartments on Sunday. As the girl, I got the “safer” upstairs apartment – I’m not sure I got the better deal, the stairs are a killer, really. Must not drink and then attempt those stairs, could be disastrous. The apartment itself is great – small but contains everything I need. I even have a loft! Comes complete with free internet and cable TV – problem is you can’t use both at the same time – I’m working hard on that one. 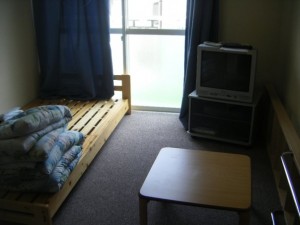 The main room in my apartment

Since moving in, we have been exploring the area. We both have bikes (I inherited mine from an ALT who recently left Kurume, Matt has rehomed an abandoned bike from a previous tenant of our apartments) and have been using them non-stop. We are only about a 10min ride to Hakata, the main station in Fukuoka, and about a 15min to Tenjin, the other main station in Fukuoka. Great fun, but must be done after dark (due to the extremely strong sun and my lack of sunscreen). 100 yen shops are featuring alot in our travels (have basically furnished the apartment entirely from the high quality $2 shops). Next step – JOBS!

Take care all. I’m now here till at least Christmas – feel like visiting?

Well, it’s official, my most favourite-ist place outside of my home country is Japan. I don’t know why I haven’t been back here since I first came in 2000, I’ll definetly be visiting more in the future. My Japanese is pretty rusty, I haven’t really practiced or studied it for about a year, but it’s coming back to me in droves. The customs guy at the airport pulled me up, saying ‘Hello, could you please open your bag’, to which I replied ‘Konnichi wa’. We then chatted in Japanese about the weather, where I learnt Japanese and where he thought I should go in Tokyo. He then let me pass, bag unchecked!

Tokyo was my first stop, as I had never been there. I stayed in a fantastic little hostel right in the heart of Tokyo. They say Tokyo is the most expensive city in the world, but I don’t agree (Dublin wins the award for that, in my opinion). The hostel I stayed at cost just 2000 yen per night – about half what I was paying in London. I also spent one night in a capsule hotel – something I just had to experience. Because trains finish up early, many Japanese business men (and women) miss that last train, rather than catch a taxi home (can be extremely expensive, particularily in Tokyo), they created the capsule hotel. In the room where I was, there was a long wall full of ‘capsules’ – tiny rooms, about 1 meter high and a bit over 2 meters long. In each capsule, there was a bed, tv, radio, light and tiny holes in the wall for a book and so forth. On another level, there was a [women only] traditional Japanese bath room. It really was suited to a person who misses the last train – they give you a towel, facewasher and pajamas. In the bath there was shampoo, conditioner, toothbrushes, everything for free. Lots of fun, very Japanese. 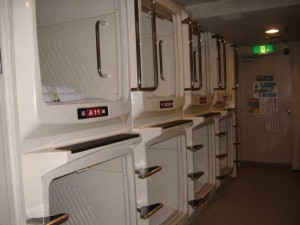 I met up with one of my host sisters, Sawako, whilst in Tokyo, which was great. Sawako is on her last year of studying acupuncture, and she showed me around the city, helping me with the subway (a big blessing – the Tokyo subway consists of a heap of different lines, the map looks like a ‘messy plate of colourful spagetti’). We visited Asakusa Jinja – a huge shrine around the corner from where I’m staying and watched all the school kids running about. October is the official month when school trips take place and so everywhere we went in Tokyo had middle school kids racing about, taking photos. The next day I visited Akiharaba – electrical town. I had so much fun that I spent 3 hours in a single store. Just playing and looking and playing. Electronic dictionaries, digital cameras, mp3 players, rice cookers, even eletronic toilets! During my time in Tokyo, I also visited Ueno Park (and spent a couple of hours playing with a kitten and her ‘mum’ – a 3 year old Japanese kid), Ginza (very happening, busy area, full of ‘modern’ tokyoites – and the occasional kimono clad woman) and Harajuku (home of the Japanese ‘alterative’ lifestyle)

Next stop was Kobe, where I visited another of my host sisters. Asako came out to Australia in 2001 and spent 6 months living with us. It was great to see Asako and meet her family. Asako took me to see Kobe, where we spent most of our time wandering around, shopping and seeing the sights. The highlight of the visit was definetly the time spent around the dinner table – listening and talking with her family, watching her grandfather do magic tricks and listening to the concert they put on for me (Asako’s sister played the keyboard, Aunt played the piano, Cousin played the flute and Asako worked wonders with the xylophone). It was hard leaving, but I’ll be back! 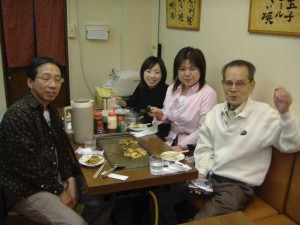 The final stop on my trip around the world – Fukuoka – was fantastic. Kurume, a small-ish (about the population of Melbourne) city on Kyushu is where I lived when I was an exchange student, way back in 2000. Seeing all my host families again was fantastic, as was visiting all the places where I used to hang out. My host families took me all over the place, it really was weird seeing all the places from 5 years ago. So much has changed, but so much is the same. Also went to my old high school and saw my old home room teacher, as well as a few others. Managed to find my way to town and ride around where I used to, all on my own, which I thought was a pretty decent effort. Visiting my host families and catching up with them has been great, I wonder if Japan is where I should be, after all? Only the future will tell… 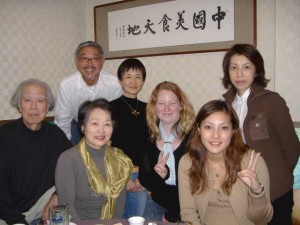 Me with 3 host families, at the local Chinese Family Restaurant

Of course, I’ve been enjoying the Japanese food too. Gyoza – Japanised Chinese dumplings – is probably my favourite, but sushi, gyuudon, yaskisoba and takoyaki are up there too. The food is reasonably cheap too, about $5 or $6 for a sit down meal, as long as you know where to go. I love being able to order food and know exactly what it is you’re eating. That said, it doesn’t always work out that way – the other day I wandered into a resturant, looked over the menu and realised I only understood one thing – yakisoba. That was fine, I thought, I love yakisoba. But when I ordered it, I was told it wasn’t available. Glancing over the menu again, I decided not to risk it and point, but rather to ask the waiter for his suggestion. He raced away and came back with a delicious dish, but I’m still not sure what I ate!

Well kiddies, I’m now ready to go back to Tokyo for a few more days, then I head for home. What a fantastic year, I’ll miss the traveling, but am quite looking forward to having my own bedroom, a bathroom where I can leave my shampoo and a kitchen where I can store stuff… And of course my family, friends and pets!