I began by booking my ticket in Shanghai at the China Japan International Ferry Co., Ltd (page is in English). None of the metro’s seemed to go near the office – I took a taxi (address: 上海市東大名路908号金岸大厦18楼, 18th floor, Number 908, Dong Daming Road, Shanghai). The office is behind the bank, etc – go to the right, around the back of the building and take the lift to the 18th floor. Staff in the office spoke in Japanese and Chinese (maybe English as well – I only communicated in an interesting mix of Japanese and Chinese!). To book my ticket I needed my passport and cash (credit card wasn’t accepted, but the bank out the front gave me cash on my mastercard). I was given the choice of what type of room I wanted – I went with the cheapest one! 18,000 Japanese Yen (although I paid the equivalent in Chinese RMB, you are given the choice) and I had the ticket in my hand.

Check in started as 11am, so I jumped in a taxi with the intention of being there with plenty of time despite the late night I’d had. And isn’t it just typical that the only dodgy taxi I got in China was when I had a deadline, was slightly hungover and had all my luggage… Direct your taxi to go to 上海市東大名路800号 (Number 800, Dong Daming Road, Shanghai) – the guards will probably stop the taxi and direct you to the right place.

Once inside the underground terminal, I went to the far end of the building, where (English speaking) staff asked me to pay an exit tax of 22 RMB (payable in RMB or JPY). They gave me a receipt/ticket thingy (hold onto this). Whilst waiting around, staff came and checked my ticket and checked off my name, also asking me to write down my (Australian/Chinese/Japanese) address. They also gave me a customs form to fill out. When the time came to go through customs/immigration, everyone raced for the gates, but I eventually got there. Don’t be fooled at the customs area – regardless of whether you have anything to declare, put your luggage through the scanner or face the wrath of the guards. The rest of the process is identical to departing any country via air.

Once through, I checked my backpack in – no way was I going to lug that thing around, although plenty of people were taking all of their luggage onto the boat. Then we caught a bus over to the dock and climbed up the stairs and onto the ferry. First stop was the front desk, where the staff found out my room number and directed me there, and then I was off to explore…

My room had 8 beds in it – 4 sets of bunks. At the front of the room, in front of the small window was a television that had a variety of Chinese and Japanese chanels (including, at one stage, Bewitched!). Each bunk had a hook for a jacket, a light, a small pouch to put things in and a curtain to close out the outside world. Next to the entrance to the room were shelves (not lockable) to store bags etc. 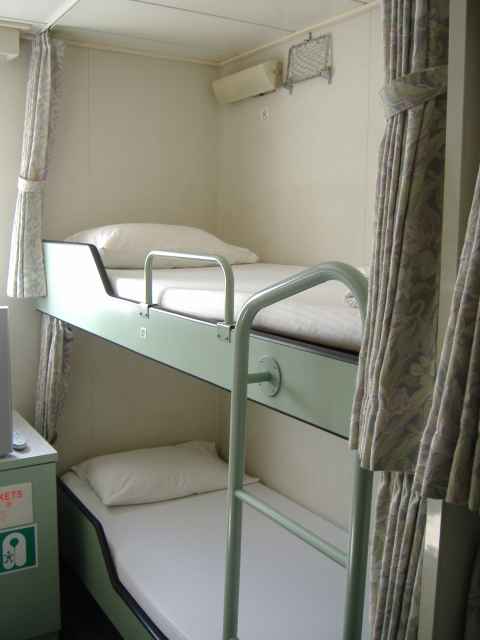 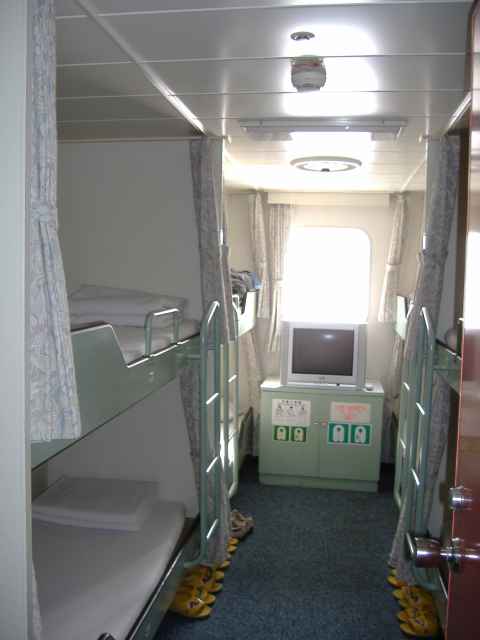 Wandering around the ship, I soon discovered the bar/karaoke room, dining room, coffee room, games room, mahjong room, table tennis table, reading area, television area, shower rooms, washing machines, duty free shop and vending machines. The dining room had specific hours when it was open – breakfast was too early for me to bother, but lunch was around 1pm and dinner was around 7pm (times were written on the door). Food was mainly Japanese style, with some Chinese dishes. Priced in JPY, but payable in JPY or RMB, food was reasonably priced (for Japanese prices – about 600 to 800 JPY per meal) and didn’t taste too bad. On the second morning I actually made it up on time for brekky and was surprised to find I wasn’t expected to pay – something to keep in mind. 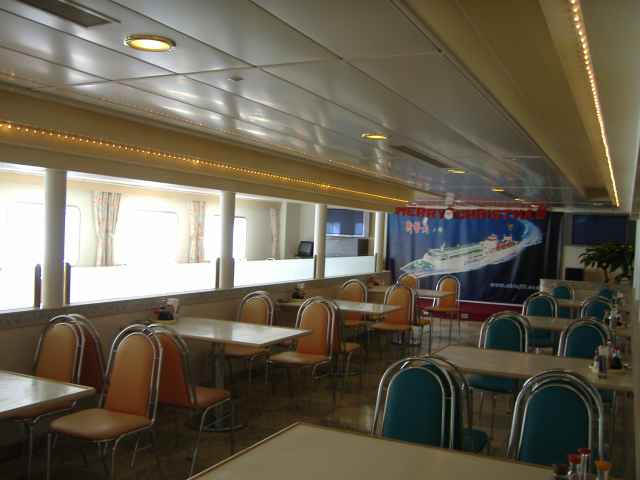 Other than finding out the options for eating (which plays an important part in my travels!), I also discovered that the ferry had a range of other features I wasn’t aware of. In one room, I found a couple of washing machines and dryers complete with a bag of washing detergent – tough that all my stinky clothing was in my backpack, with checked luggage. I also discovered that the ‘reading corner’ had a small selection of 2nd hand books (one of which was in English) and some copies of an English version of a Japanese newspaper. The vending machines (which only accepted JPY) served up beers, sake, soft drink, juice and noodles. The duty free shop had a nice selection of alcohol, as well as oreos and packet noodles. In the bathrooms, boiling water could be found for making noodles and soup.

The journey took a little under 2 days – I boarded at 12pm on the Saturday in Shanghai and arrived at about 10am on the Monday in Kobe. Before getting off the boat in Kobe, we had our temperatures taken – which involved walking past a camera like device that checked we weren’t going to disease all of Japan. Then through immigration (got a 90 day visa at the border) and onto Japan!

Over-all a highly recommended trip, very relaxing (slept most of the time) and a great way to meet a variety of other travellers.

Prices in JPY (from China Japan International Ferry page, check to make sure these are the most up-to-date prices)