Whoops – I might have been a little lazy in writing my last blog for my China trip… I’ve now been home for nearly a month (wow, time flies), and thought I’d better write that last post. But, honestly, I don’t have the time or the energy to write a nice long post like I normally do, so instead it’s a photo blog. 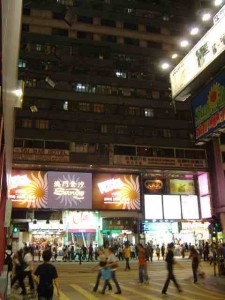 My “deluxe hotel” in Hong Kong – these buildings consist of many, many low budget hostel/hotel/guesthouses, ranging in grime from slightly grimey to total uk. I managed to stay in one of the better ones, Taiwan Hotel, for only HK$200 a night (for a twin room with a window, AC and private bathroom). 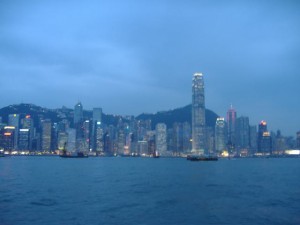 Looking over the waterfront, waiting for the night-time lightshow. As far as cities go, I’ve decided that Hong Kong is actually a pretty nice one to look at, plenty of greenery as soon as you step away from the city, and interesting buildings in the middle of town. 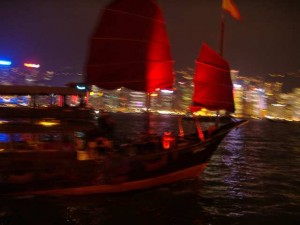 Watching the ships go by, just before the nighttime light-show 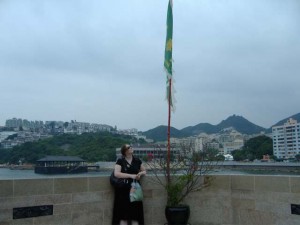 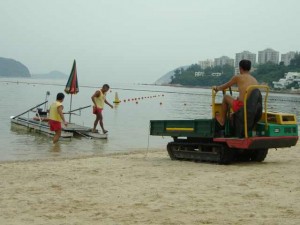 Bringing in the boat – the beach “closed” at 6pm – complete with announcements to tell us to get out of the water! 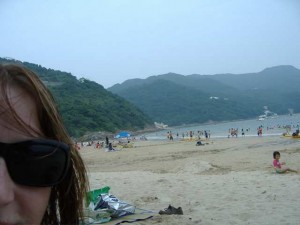 Me at the beach 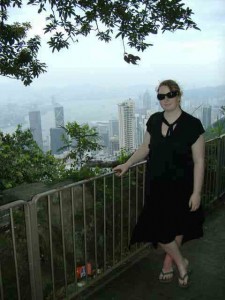 Me, at the top of the peak

Nice view – but my mind wasn’t really on the view that particular day. Probably can’t quite see it in the photo, but my legs were the same colour as the red hat Matt was trying to “rescue” (see below). Owwwwww! 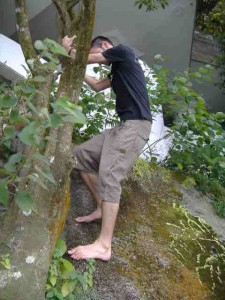 At the top of the peak, “rescuing” a McD cap… 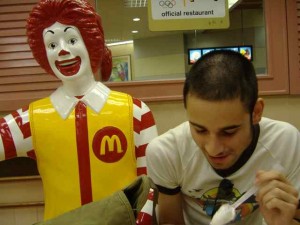 Just hanging out with our new friend at a local resturant… 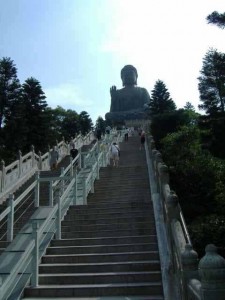 The world’s tallest outdoor seated bronze Buddha – a whopping 268 steps to the top! 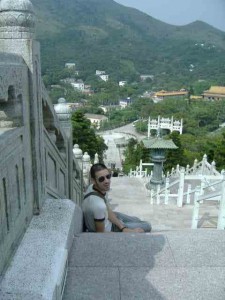 So, now I’m home again, eagerly awaiting the birth of my neice/nephew. Off to Sydney, then Brisbane next month, then home for birthdays and Christmas. Hope all are well – this will be the last post for a while, until the next trip (China in January?)

Hong Kong is so incredibly different from mainland China that it’s easy to forget that they are technically the same country. Plane trip was uneventful, although we ended up sitting next to a uni lecturer from Sydney, he leads the perfect life. Teaches during the semester, then travels the world giving talks on his research. Our pilot on the Dragon Air flight was also Aussie, so once again we were surrounded by fellow Australians! Weather in Hong Kong is similar to India and Thailand, hot and humid. Coming from Beijing, where we were struggling to move under all our jumpers and coats, it was a bit of a difference.

First night was spent in the hotel from hell. We were so buggered from the traveling that we agreed to stay there, in retrospect we probably should have kept looking. But once you’ve taken off your huge pack (both of our packs gained about 4 kg from China), it takes a lot of effort to get it back on! We stumbled into our ‘double room’ (the bed was slightly larger than a single bed), moved the bed away from the wall, propped our very heavy packs against the door, pulled out our sleeping sheets and fell asleep. No chance that anyone was getting through that door, we could barely lift one pack together, let alone two of them stacked against a door. In fact, we laugh when other travelers lock their packs to train seats – as if anyone could actually lift our packs to steal them…

The next day we threw on our clothes from the night before and rushed downstairs to book into a new hotel. The room isn’t much bigger, but it has a nice shower, walls we’re not afraid to touch, and a tv. Our requirements for a hotel used to be a bar fridge and a bath, now its just a clean wall and a door between the toilet and the bedroom… The building that we’re staying in is called ‘Chunking Mansion’, a huge set of buildings which encompasses many many hostels/hotels. Turns out most of them are pretty grotty, but we stumbled onto a good one second time round, so are happy. The local news ran a story about the mansions last night, saying how they used to be a haven for crime, but they’ve increased security (read: a guy in uniform stands next to the lift…) and have less incidents since then! Our hotel is nice though, and the woman in charge of it seems to be really friendly and happy to help us.

Third day was spent at the Hong Kong Gifts and Premiums Fair, which was huge! A full day spent traisping up and down escalators, the exhibition centre in Hong Kong is massive, at least 6 floors high. The things that were being sold were interesting, from cutsie umbrella’s (a room full of them) to huge inflatable pepsi cans. By the end of the day we were ready to collapse and crawled back onto the ferry. Oh yeh, thats right, we took the ferry to get across to the trade show, we’re staying in Kowloon, and the trade show was on Hong Kong Island, ferry ride was interesting. Whilst waiting to get on the ferry, the green light goes on and everyone RUNS to get onto the ferry first, people in elegant suits and racing with the rest of them. We’re over that kind of thing, just like when we’re on the planes, we just wait till everyone’s gone and meander at our own pace…

The rest of our time in Hong Kong has been spent shopping and just wandering around. The markets are funny, prices aren’t cheap (well, not compared to Beijing prices), but you can bargain the store owners down. Apparently the average tourist doesn’t, so the bargaining is hard. I got a bag the other day, after bargaining, we had some foreigners watching us, amazed as they didn’t realise you could bargain! Bags and clothing seem to be the items of the day, but there is plenty of other stuff too. Camera and electronic stores everywhere, and tailors too. Its a bit like being back in India, the area that we’re staying in is full of Indian tailors, everyone grabs at your arm as you walk by, saying “come and see my shop, good price for you, you are my friend!”. We’ve been through India, we’ve handled the hawkers at the great wall, we’ve handled the hawkers in Delhi, so we handle it all with a shrug of the shoulder and steam ahead.

We’ve just packed up our boxes to send home from Hong Kong and China, as Tash pointed out our packages are getting bigger and bigger, the more countries we go through. Oh well, it will be the last package for a while, Europe’s going to be so expensive! [and cold…]

Take Care all, let me know whats happening in your corner of the world,
xo bobs