This new budget hotel is conveniently located and a fun place to stay.  Rooms are large and spacious (although mine was upgraded), mine had a small comfy couch, large (comfy) bed, a flat screen tv and a small desk (with free water and snacks). Attached bathroom had a shower and a toilet, both rooms were very clean.

Every second floor has a shared fridge, with a free washer/dryer on the top floor. Tea making facilities and a (free) computer with internet are also available in the top floor. Free WiFi on each floor. Hotel has been decorated in a very fun way, and staff are very friendly and helpful. Location is very convenient (perhaps a 5 minute walk to the main Ximending area). Loved my stay here.

No breakfast included – but use this as an opportunity to explore the local eateries – fantastic Taiwanese omelette place around the corner.

I spent some time searching for somewhere to stay in Beitou, and although this place was a little higher than what I normally spend on accommodation, I went with it for two reasons: it was ready to book (I just booked through one of the booking engines, many other hotels in the area only had phone numbers, with no way to book online) and they boasted hot springs in their rooms.

This was the first non budget hotel I stayed at on this trip, and so the nice big, clean, pretty room was a shock to me (other reviews I read suggested they were a little run down, I certainly didn’t experience that). My room had a large very comfortable king bed (actually it was two singles pushed together) with a mini fridge, flat screen tv (with star movies etc) and plenty of space. The bathroom had a large mirror, a small (Japanese style) shower area and (the highlight off the room) a large stone bath, fed by spring waters. 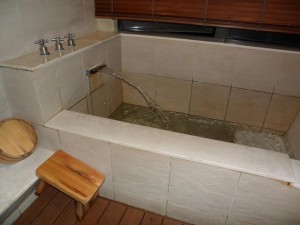 Included with the room is entry to the hotels public (ie naked) hotsprings – I was too caught up in my personal one that I didn’t try them out I’m afraid – next time! Breakfast was also included, which was decent. Location is good, not far from the train station, and opposite the main park (ie near the hot spring museum etc).

This futuristic budget accommodation is a cross between a capsule hotel, a hostel and a business hotel.  Dimly lit corridors are filled with small rooms (almost “pods”), separated by gender (guys don’t have access to the girls floor and vice versa). The rooms themselves don’t have lockable doors, but rather a thick sturdy curtain to block everything out (note that this place isn’t as quiet as a hotel due to the lack of a door but not us it as noisy as a hostel, consider earplugs if you’re a light sleeper). Drawers under the bed (not quite high enough to fit my carry on luggage in, but certainly wide enough to fit plenty of bits and pieces) are lockable. The rooms are small, but have everything you need – a large (comfortable) bed, small side table, mounted tv (with a headphone jack next to the bed), and clock/alarm. 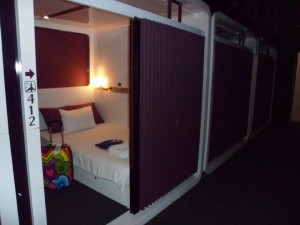 There are small communal “chat rooms” (mobile phones are not to be used in the rooms) with comfy floor seats and vending machines.  Shared toilets (complete with auto hot seats) and a large “make-up” room compete with handcreams, hair dryers and hair straighteners (not sure that the guys floor has this!). There is also a “spa” room – a typical Japanese communal bath room, with a sauna and a onsen bath. Not sure if there were private showers – I didn’t look.

Location is good, above the Namba station complex (but be aware this station is quite large, it’s about a 10 minute walk from the airport line). Plenty of shops in the area, although it took me a while to find somewhere for dinner. Overall a fantastic experience, and much  better than some of the other budget hotels I’ve started at in the Osaka area.

Set it a fantastic location, the hostel is easy to find from the airports and from downtown. There are a couple of eateries in the area (a great cheap tempura restaurant just down the road, near the station). The staff were friendly and helpful (I had lost my luggage and they were helpful in suggesting places to shop). There was a common room with a beer vending machine upstairs. Plenty of computers in the lobby to use the free internet available.

Rooms were a little hot, the air conditioning just couldn’t keep up (I was here in summer, it wasn’t unbearable by any means, just not as cool as it could have been). The beds were unusual – they imitated the capsule hotel style, so even though it was a dorm with loads of beds, the noise was limited, as the wooden “capsules” hid most of the noise (and light). The showers were fantastic (had to pay for hot water, but they were clean and had good pressure).

Update (the above was written in July 2008, I returned to stay at Ace Inn for 3 nights in December 2012): Once again, enjoyed my stay.  Rooms were still a little hot (but it was winter this time) – I think the heaters run a bit high here.  I found the beds to be a little hard this time, but I think it was more because I’m not used to the futon style yet (beds were futons on wooden slats).  I hired a bike from the lobby, 500 yen for a day, which was a great way to explore Tokyo (and get lost!).  Free wifi on most floors, and computers still available in lobby to use.  Showers are still 100 yen for hot water, but I stand by my original statement – clean, good pressure, I’m happy to pay 100 yen for that.  Staff were still very friendly, had umbrellas available to borrow for rainy days. 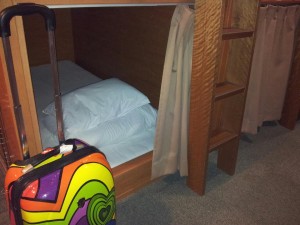 I choose this hostel because of its location – directly opposite the fun manmade lagoon. There are plenty of very nice hotels in the same area, however this is one of the few budget options.

Room was adequate – (double) bed wasn’t the most comfortable I’ve slept on, but did the job. There was an air conditioner, however it automatically turned itself off in the middle of the night, annoying when it’s needed to sleep (had to get up out of bed and flick the switch to turn it on again). Small sink in one corner of the bedroom (needed because the share toilets didn’t have sinks for some reason). There was one powerpoint in the room, however it was very high off the ground, making it challenging to charge phones and cameras. Room was what I consider “cleanish” (although the sheets appeared fine). No toilets or showers in the private rooms.

Hostel also had a large communal kitchen, laundry, general hangout space and a tour booking service. Shared showers looked a little grimy, but can’t really comment on them (I went over the lagoon both nights, so had a free (hot) shower there). Computers with internet (paid) available in the lobby.

Location is perfect – opposite the man-made lagoon and a short walk to the wharf from where all the cruises to the GBR leave. Plenty of restaurants in the area. Overall, considering the location, this is a great budget option for a short stay in Cairns. However keep in mind that this is a hostel, not a budget hotel, and adjust expectations accordingly.