Despite the standard complaint of lack of sleep, arriving back in London was great – it’s so relaxing arriving in a city where you understand the customs, and you know exactly how to get to your hostel. Even the loud broadcasts over at the tube telling us to ‘Mind the Gap’ didn’t bother us. However, the weather wasn’t quite so great. Am almost used to the cold – on the first day we set out and brought Tash a winter coat – the freezing weather was enough incentive to make her pick the first jacket she tried on. We also went and brough some winter trousers from a really weird place in Camden Town… We wandered into the ‘Gothic style’ shop, which was filled, floor to ceiling, with all sorts of gothic clothing, from black corsets to PVC mini skirts. The owner – a guy who looked and spoke just like a Russian mob boss, ordered the assistant to ‘take zem to zee second floor – you vill buy sumfing’. Sure enough, a bit scared with what was going on, we walked out of the shop with a pair of trousers and our pockets a bit lighter.

We took this last week together to explore a bit of England and Wales before we split up, and so that’s exactly what we set off to do. Unfortunately, we have gotten a bit blase about planning things, and so we chose where we would go by closing our eyes and pointing at a map. First stop was Bath, where we spent the day wandering about the ancient Roman Baths (yeh, go figure, we left Italy to goto England to look at Roman Baths…). Next stop was Cardiff, the capital of Wales. We arrived late afternoon to find that the hostels were all booked up – turned out the Cardiff Marathon was on the next day. Oops. Managed to get a double room above a pub – we paid 58 pounds (about AU$130) and were just relieved to have a room. We woke up the next morning to the sound of clapping – peering out the window we watched runners going right past the front of our pub. Getting to the bus station proved difficult – we had to try and get through the runners. We’ve crossed roads in Thailand with scooters racing all over the place, we’ve weaved our way between elephants in India, we’ve jumped on and off moving trains with all our luggage across the globe – I have never seen Tash look as fearful as the day we attempted to cross the path of the marathon runners.

Chester was a cute town on the banks of a quiet river. We spent our time marveling at the gorgeous houses and watching the swans (from afar). Unfortunately, our night didn’t turn out to be as pleasant – we had a loony in our room who spent the whole night swearing and yelling. I guess that’s the price you pay when you stay in hostels… Our last stop together was York, where we basically spent all our time shopping – we found the BEST 1 pound shop, fantastic. York was an interesting town, we took the time to go on a ghost tour and were pleasantly surprised (and spooked!). Our host told us of one set of ghosts that are regularly seen. Apparently they are dressed as Roman soldiers, and they march from one side of the basement to the other. The interesting thing is that you can’t see below their knees – it is as if their feet are below the floorboards. It turns out that the level they are marching at it where the old Roman highway used to be, many many years ago. Over the years, the land has built up, so we now walk around about 6 foot higher than they would have back then. 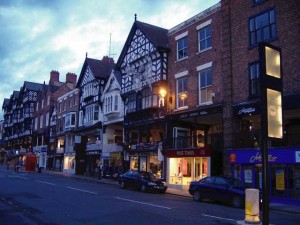 After leaving Tash in York, I headed back to Bath to take a tour of Stonehenge and the surrounding area. I ended up seeing Avebury, Castle Combe, Lacock Village and Bradford-on-Avon as well as Stonehenge. Although it isn’t as well known as Stonehenge, many people view Avebury as a much more impressive site. Indeed, it is the largest stone circle in the world, at 427m in diameter an area of some 28 acres. We got to wander about the stones, dodging the sheep. Castle Combe was a great example of the Cotswolds, the name given to a style of building. In fact, the first place we stopped was where the original Doctor Doolittle was filmed. Lacock Village is home to Lacock Abbey, where some of the scenes from Harry Potter were filmed. Stonehenge was our last stop, and it was spectacular. Although the site is right by a noisy highway, it didn’t take away the fact that I was standing there looking at such a well documented sight. Another one up there with the Great Wall, Taj Mahal and Eiffel Tower. I’m now back in London, biding my time until I fly out for Tokyo.

Standing in front of ancient stone at Avebury

Tash and I split up in York, it was weird to see her go. We’ve spent the best part of 7 months sharing almost every hours – sleeping and awake – together. She’s off to Edinburgh to try and make some money to further finance her travels, whilst I’m getting ready to go back home to finish my studies (as if I’ll ever finish…). It’s been a great couple of months, but I guess its just about time to get back to reality. Next time I write I’ll be back in Japan – yey!