Hey guys, how is everyone? We’re starting to get ready for Beijing (gunna be cold there, brrr). But before we go, wanted to do a quick update… In the last couple of days we have been to some of the most well known spots in India… First stop was Fatepur Sikri, which is a castle built in the middle of nowhere. The maharaja of the area built it for his 3 wives. It was pretty awesome looking around, we were shown his bedroom, which was all made from stone. In the middle of the room was a very tall (about 3 metres off the ground) very big (he did have 3 wives!) bed. Apparently, it was so far off the ground because in the summer they would flood the castle, and so the water would come up to just below his bed, thus making it cool enough to sleep. The bedroom was next to the kitchen, so that in the winter he was set as well. Other interesting things abot the castle included the games room (which was set up play hide and seek) and the wives’ quarters. Each had their own areas, the biggest one was allocated to the wife that gave him a son…

On the 26th we visited the Taj Mahal in Agra. Truly impressive. The Taj Mahal was built by Shah Jahan for his wife, Mumtaz Mahal. It is basically a tomb. When she died giving birth to their fourteenth child, he was so distraught that he ordered it to be built (with the tax-payers money!). It took 20,000 workers 22 years to finish. The main building was built by digging huge wells and putting wooden supports into them. The building then sits on all these supports, not on the ground. This way, in case of an earthquake, the building wont fall. The whole area is perfectly symetrical, one the left side there is a mosque – on the right side there is an identicle one that cant be used as it is facing the wrong direction, it was built purely to keep everything else in line. All the decorations on the buildings aren’t painted on, they are semi precious and precious stones that have been carved into the marble. 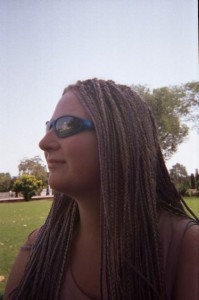 While we were taking photos we were approached time and time again by people who wanted to take my photo, its beginning to become a standard thing because of my hair. Finally we had to leave because people were starting to form queues to take photos of my hair. Oops!

The day we visited the Taj Mahal was Holi, the festival that I talked about earlier (where everyone celebrates ‘colour’). Everywhere we looked there were people running about in shirts stained with pink, blue and green! Krish kept us under careful guard so that we didnt get caught up in the festivities! For days afterwards we kept seeing straight faced guys going to work in their business suits, with pink and blue ears and necks! 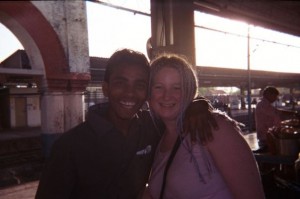 After Agra we caught a 12 hour train to Varansi. Train wasnt too bad, we had our packs on our beds with us though, so there was absolutley no room. Even still, we managed a bit of sleep. In Varansi we saw all of the usual sights, all of the temples and forts. We also went on a river boat, on the river Ganges, totally amazing. We passed all the famous ghats (stairs next to the river). One of the more interesting ones was the cremation ghat, where we saw a couple of cremations taking place. Right in front of everyone they had the fires going, you could see everything. Its just a way of life over here I guess. Anyway, we’re back in Delhi now, roughed the train again, this time we went without air conditioning, we decided we could handle it. Got on the train to find out that our entire area berth was full of foreigners, we had a European couple with us and a couple from New Zealand. Very interesting… That was yesterday, got into our hotel and crashed, didnt wake up tilll 2pm this afternoon, very exhausted!!! 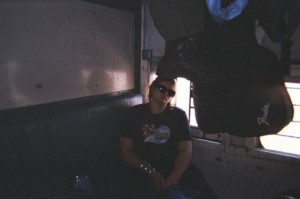 Signing off for now… xo