Back in Europe once again, enjoying the life of the traveling backpacker. Well, not quite, as we have now settled down in Edinburgh to organise some funds until we head over to Europe to travel our last stint. We’re staying in a hostel in the central part of Edinburgh, the hostel is confusing to say the least. It’s just like one of those cruel mazes your parents take you to when you’re a kid, just so they can sit on a terrace above drinking coffee and laughing when you can’t find your way out… Every time I try to find my room (I’m in room ‘E’, bed ‘E=mc squared’, all the rooms have letters and beds have names to match, my first night I was in room ‘J’, bed ‘Joker’), I end up in another part of the hostel, if you’re not careful I’m sure that you could end up in another country altogether. Luckily, the doors back to reception are marked, and I always take a stash of breadcrumbs, so I don’t get lost that much anymore… Once again we’re in a predominantly male room – at least the door doesn’t say ‘MEN’ on the door this time. Tash was here all on her own, but now that I’m here, we’re starting to take over… The guys seemed quite horrified when they came in the other night to find us sitting in the middle of the room with another chick, sorting out my clothing, figuring out what to wear and other general girly stuff. I keep teasing them that I’m going to start putting posters of half naked men on the walls… We’ll see…

Edinburgh is a gorgeous city, everywhere you look there are old buildings, from wherever you are you can see the castle on the hill. I watched Harry Potter the other day, then went for a walk in the Scottish mist… It’s easy to imagine Harry Potter and all his friends lurking around every corner. Waking up after a night of heavy partying to the sound of bagpipes is an experience I never expected and will never forget. Walking along Princes Street, its not uncommon to see a man decked out in the kilt and all, standing on the side of the road playing his pipes. Even better is the guys my age wandering around the clubs in their kilts after a formal event, puts a completely different spin on things.

I went for a day trip to Glasgow the other day, didn’t enjoy it as much as I enjoy Edinburgh. From what I saw, Glasgow seems to be a more industrial town, without as many interesting buildings. At least, not in the middle of the town. Wandered along the main shopping drag for a while, the highlight of the day was going into a pub to get haggis, mmm yum. Nah, not really, it was an interesting dish, kind of like mince meat with more spices, and bit of a ‘bloody’ taste. It was ok, not my most favourite though. Still waiting to find a traditional fish ‘n chips shop, YUM!

As Tash already has a job, and I’m not all that keen to actually look for one, I’ve spent a lot of my time just wandering around the streets of Edinburgh, exploring on my own. I’ve been to Greyfriars Kirkyard a couple of times, I keep getting drawn back, its a really ‘nice’ graveyard, if that can be called a fitting word for a cemetery. If you’ve read my previous post, you’d know about our ‘supernatural’ encounter in the cemetery, it was really weird. We took the photos, and didn’t really look at them. A couple of days later, when I was uploading them onto the computer, I noticed the blue streak. I pulled out the camera and lo and behold, it was on the camera as well. The kirkyard is probably most famous for ‘Greyfriars Bobby’, the little Skye terrier that supposedly sat by his dead master for 14 years. He is commemorated by a statue out the front of the kirk, said to be the most photographed statue in all of the United Kingdom. Despite all the ghosty activity that is known to happen around the cemetery, many people visit and just sit around, reading books or having picnics. 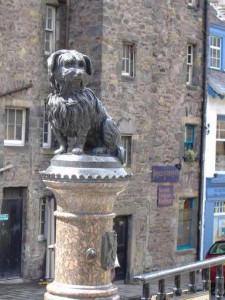 Will be visiting the castle sometime soon, also planning on taking some more day trips around the area, I just have to motivate myself enough to get out of the hostel – its oh so cold outside! Hope everyone did well with exams, and are getting ready to party!