Well, its been a hell of a week, and its only just beginning! As I’m sure everyone’s aware, the G8 summit is being held in Edinburgh this week, and as a result, the city is FULL of people ready to protest. Everyday more and more people arrive at the hostel with backpacks, looking for a bed. Everywhere is full, it seems many people are just camping out on the sides of the streets. People at our hostel are making money by ‘selling’ their beds, and sleeping in the tv room for a night (not me, I need a good nights sleep in a bed, otherwise WATCH OUT!!!). Elysha, Nick and I joined the protest on Saturday morning, it was great. Really uplifting, everyone was in a good mood, we had bongo drums and guitars accompanying us the whole time. More people than were expected showed up, they think there were about 200,000 people marching. Protesters were asked to wear white, so we could form a giant white band around the city. However, I’m a backpacker, and all good backpackers stay away from white clothing – it gets dirty way too easily. I managed to rustle up a white rain jacket though, so I was set. The march started and ended at the meadows, the sports area. People were everywhere, the crowd marching was generally a younger one, lots and lots of young families with children in tow.

The march went off without a hitch, there was one slight disturbance when some masked teenagers caused some trouble in a bar, police took them in but didn’t charge them. Of the 200,000, only one person was charged, with drug possession. Since Saturday there’s been a few more marches, theres one on right now, sounds like it’s a fair bit more violent – its a protest by an anarchist groups dissent, there have been police riot vans screaming along Princes street all morning, and I can hear about 3 helicopters hanging around outside. Apparently, police have barricaded a large group of protestors on princess street in front of the castle, with helicopters floating low above them, and a heap of police everywhere. Sounds exciting, I might go down soon and see whats happening.

The lead up to the G8 has been fun to watch. Alot of the shops boarded up their windows – Interestingly, McDonald’s, Burger King and Starbucks didn’t bother – although they do have a heap more security on. And they seem to have their own contingency of police hanging around. We were watching one of the marches yesterday, one of the guys suggested throwing a McD’s drink in amongst the protestors, to see how much trouble it would cause. We are all a bit put out that whilst the newsagent has boarded up his shop, McD’s is getting away without it, we want to see DAMAGE!!! 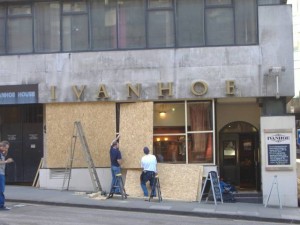 Boarding up shops in Edinburgh

Apart from the G8, not much has been happening. I’ve been racing around trying to find accommodation for mum, she’s arriving next week. Elysha, Tash and I were discussing the possibility of her hotel having a bathtub, and ended up basically drooling with the prospect of having a bath – the things you miss when you’re traveling! I went to one of the museums in town last week, the People’s Story. Was really interesting, full of quotes from older generations, about what Edinburgh used to be way back when. Good fun. We’re talking about going on a ghost tour tonight, should be fun. Hopefully not too many protesters about. Last night we went out (normal Sunday occurrence). Expected lots of people to be out drinking, considering how many people are in town at the moment, but there was hardly anyone out, everyone’s too scared in case trouble starts… 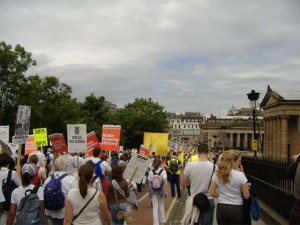 Marching along The Mound, Edinburgh