My fingers are soooooo cold. What’s making me even colder is the knowledge that we aren’t even really into winter yet – it’s going to get a lot colder! I don’t know the exact temperatures, but they have definetley plummeted in the last few days. I haven’t resorted to my thermals yet – but it’s only a matter of time. Discussions on where to go for dinner, when to leave for class, what to do on the weekend all center around one thing – what will be the warmest way to do it (I can foresee a lot of 2 minute noodles being eaten in our room!). For some reason, the heating in our classroom isn’t working so well anymore, and it was almost icy today. To top it off, my cold is progressively getting worse, so I’m madly sucking on cough lollies to try and get rid of it. I’ve run out of mouthwash (dad’s suggestion on how to get rid of the cold quickly), and have – as per dads suggestion – gone out and brought myself a bottle of cheap spirits to gurgle. I forgot that I had ‘experiences’ with baiju last time I was in Beijing – I nearly throw up every time I attempt to gargle it!

As per normal, we’re continually exploring the different food options. Today, we discovered that there is an upstairs part to our dining cafeteria – and it is so much better than where we’ve been eating. We have a sneaking suspicion that upstairs is only for the 3rd and 4th year students, and the teachers, but whenever anyone looks like they are about to approach us to tell us off, we just play dumb and keep eating. I have dumplings and fresh noodles for brekky – only cost 4.5 yuan (about 75 cents Australian). Tonight we are going to head out to our new favourite local restaurant – it has pics on the walls, so we just point at what we want – 3 yuan (50 cents) for a plate of dumplings. We’ve noticed a lot of the long term students that are staying at our hotel down in the lobby at about 7pm, waiting in their pyjamas. Turns out, most of the local restaurants will home deliver for free, and it’s just a matter of meeting the bike rider (‘delivery man’) at the door – now how do you say home deliver dumplings in Chinese?! Might just be the next thing I learn… 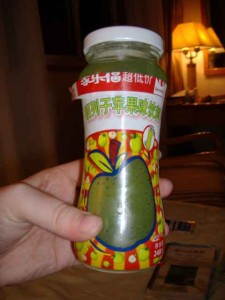 Strange apple juice that Kylie found at the supermarket, has black jelly 'pips' all the way through it, doesn't taste too bad

We spent last weekend getting to know a little of Shanghai… I had to get a visa extension, so we caught the metro to the right area, and I left everyone shopping, whilst I went off to find the visa place. I had asked my teacher where it was – and he wrote down the address and said to catch a taxi, it would be too hard to find. Stubborn as I am (and determined not to hand over the $2.50 for the taxi :)), I pulled out my map and walked. Took me 5 minutes, and it was sign posted all the way. I think Chinese teachers, just like their Australian counterparts, think that blondes can’t be trusted with maps… After a bit of shopping, our little group (Kylie, Paulina, Johnny and me) headed off to the Pearl Tower, where we spent the rest of the day. The Oriental Pearl TV Tower is a huge tower that can be seen all parts of the city (including from our bedroom window), provided the day is clear. From the top, you can see all of Shanghai and surroundings (once again, provided the day is clear, which is unusual). We managed to pick a fantastic day, and spent a great deal of time at the top, taking photos and just looking and looking and looking. 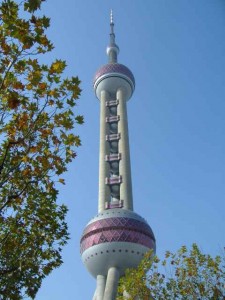 Classes are steadily getting harder, although I’m beginning to understand more. I’ve been feeling as though I’ve been picked on more by the teachers than anyone else – one of my classmates confirmed it yesterday. No idea why – there are heaps of people in my class the are basically fluent, but my name is easy to remember, and I’m sitting in easy view of the teachers. It means I have to always be paying attention, and am continually corrected, but at least I’m going to get the most out of this. It certainly is dispiriting when there are near-native speakers in the class (I’m only doing beginners Chinese, but some of the students have Chinese parents, and have been speaking Chinese in the home since they were kids), but everyone is struggling with writing the characters, so I guess it all evens out (I have some advantage in this area because of my Japanese studies).

Which reminds me – I have now successfully completed level 12 Japanese at Monash – woohoo! And with that note, I’m off…