Ahh, back in Beijing. Finally on hols again! Where to begin… My trip started with a phone call at 12:30am on the night/morning that I was to leave – “do u want to go out clubbing in the city, then we’ll drop u at the airport”… NO! Flight was relatively uneventful – decent food, had a 1 hour stopover in Hong Kong, which stretched out to a 4 hour stopover when my flight was delayed. Matt was waiting at the airport though, so a friendly face was most definitely appreciated! We got me and my stuff up to our apartment (right in the middle of Beijing), where I quickly sussed out the place (photos to come later). Best surprise was the air conditioner in my room (thanks Matt :)). 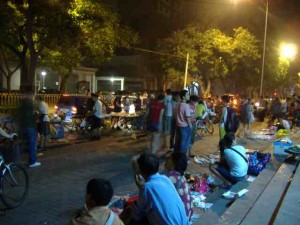 Street food outside our apartment

For the first couple of days whilst staying here, Matt had friends from his Hong Kong uni staying here – Marcus from Sweden and Tim from the U.S. Our days have consisted of sleeping till about 11, then up and mucking around till it’s safe (i.e. not hot hot hot, just hot hot) to go out. Then shopping, lunch and dinner… We’ve also been getting ourselves organised – first day was spent buying mops, detergent and finding a post office. Mop and detergent were obviously to get this apartment into order (was a pigsty!) – post office was for a completely different reason… Turns out I accidentally bought mum’s car keys with me, and she only has one set… oops. Luckily, after calling her, they found the spare, so I have been saved, phew.

Our apartment has internet access, you’d think getting that organised would be relatively easy. Not so. Matt had already bought a router so we went about setting that up – turns out the broadband here comes with a password – which we have – but it only allows one puter to be hooked up at a time. Useless for us. After a lot of mucking about, we have my macbook hooked up to the net, and is sending the internet to wirelessly to Matt’s – who would have thought?!

Halfway through setting up our net, the power went out. “Hmmm”, I thought, “it’ll just be a quick power-outage”. “Whoops” says Matt… Turns out the people he rented the apartment from had told him something about the power… Now what was it… In the end, he figured out that the electricity is on a pre-paid system – you charge up your electricity card at the bank, then put it into the meter outside the apartment. Very useless information at 11pm on a hot night… Got the electricity sorted out and am now keeping a keen eye on the meter.

Other than our technology issues, we have been shopping, eating and exploring Beijing. Went with the boys and Eric, a local guy, to the electronics market the other day. Poor Eric had never been to such a place with foreigners – the vendors swarmed and Eric was the center of attention – he got pulled this way and that. Don’t think he’ll be making that mistake again. Had Peking Duck for dinner last night – YUM. Also visited the hill overlooking much of Beijing (including the Forbidden City), the plan for today is yet to be decided. Might be a jama day… 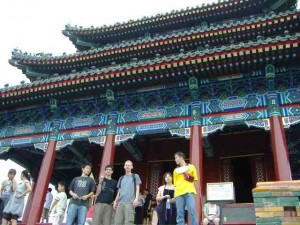 Hope all are well… We’re in Beijing for about 2 months – if you’re in the area, be sure to drop by!