Once again, I’ve found myself back in Japan – I just can’t seem to stay away! A couple of months ago, I managed to find cheap tickets on Jetstar – only $300 for the Cairns to Tokyo flight. But… wait for it… this was for business class. Done! Flight was booked, I just had to survive exams and find a return flight! Exams were survived, finding a rerun flight was not so easy -the limiting factor was that I had to return for the family Christmas, pushing flights up to over $1500 one way from Japan. And so a plan was born – Melbourne – Cairns – Tokyo – Fukuoka – Osaka – Taipei – Singapore (bus) KL – Melbourne! 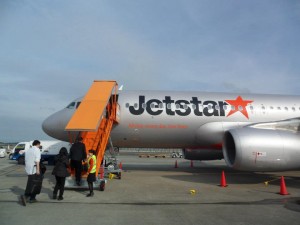 The short amount of time that I spent at a Cairns hostel reminded me why I love backpacking in other countries, but not so much in Australia. It certainly was very bare bones, but couldn’t be bet for the location. I had a wonderful short stay in Cairns regardless, spending all my time on the reef – cruise out there, a play at scuba diving, snorkeling and then a helicopter flight back to Cairns. Highly recommended. 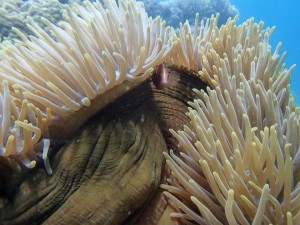 Over the years, I’ve been to Tokyo twice – the first time although I had a great night out on the town, I spent the rest of my time hung over, and the second time the airlines had lost my luggage and I was stuck in Tokyo with just the clothes on my back in the middle of a humid, hot summer. Not great memories.

This time, I had a trump card – The Lion King was playing, and I was going. I rocked up to my hostel late at night to find my pre-order SIM card had already arrived. After a few teething issues, I managed to get it going, and the next morning I borrowed a bike and set out for theatre. And went completely the wrong way, ending up near the Emporers Palace and in amongst the embassy’s. What should have taken 1 hour managed to take me closer to 4 hours!  And having not ridden a bike for over 3 years, I’m really feeling it now!  The Lion King was just as good as it was in Melbourne – truly amazing.  The costumes, the set, the singing, all of it was すばらしい.  I managed to sit next to a small girl, who was quite impressed with (or at least not upset by) my humming and the small amount of Japanese songs I was able to partially sing! 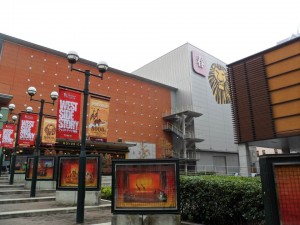 Over 10 years ago, Asako came to Australia as an exchange student and stayed with us for some time.  One of my aims on this visit to Japan was to catch up with her – not only has she gotten married, she’s also had a baby!  So we planned to do a day of sightseeing around Tokyo with her husband Hirosuke and baby Seigo.  First stop was the newly restored Tokyo Station.  I arrived before Asako, and was suprised by the amount of Japanese people milling around taking photos of the admittedly beautiful station.  It wasn’t until Asako & Hirosuke arrived and explained that it had only recently been completed that it made sense! 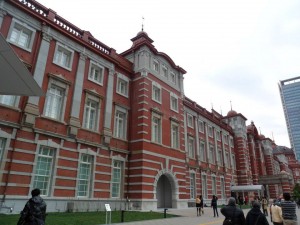 After Tokyo station we headed to Asakusa Sensouji (Asakusa Temple – often referred to as “jinja”, but this isn’t right!).  Hirosuke explained to me that even amongst Japanese people, it can be difficult to differentiate between shrine (Shinto – Jinja) and temple (Buddhist – Otera).  One way of telling is the presence of a smoking barrel (temple) or purifying water (shrine).  He also explained thati red “tori” (gates) are found at shrines, but pagodas are found at temples.  And at shrines you often clap before praying, whilst prayers are silent in temples.  All so confusing!  Basically, when in Japan (or any other country!) I look to see what the locals are doing, and follow their lead! 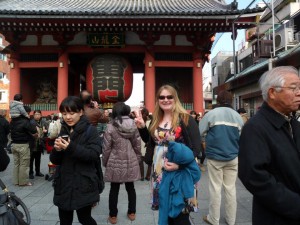 The road to the temple is lined with lots of little shops selling a wide range of souvineers.  We stopped for some fresh zaiten manju – red been paste inside a small cake, yum!  Seigo is still not sure of me! 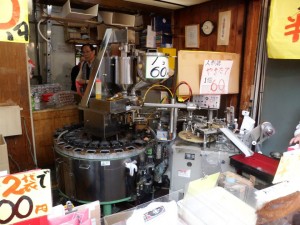 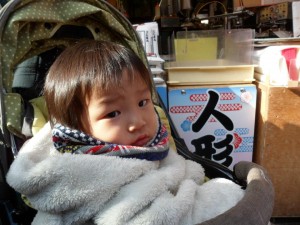 After our temple visit, it was time to take a glance at the skyline.  Here is Asako, Hirosuke and Seigo in front of the Asahi beer buildings.  Notice the golden coloured building in the background, with the grey “frothy head” on top?  We so need one of the buildings in Melbourne!  Also pictured is the Asahi flame, said to represent the “burning heart of Asahi beer”, but colloquially referred to as “the golden turd” by many locals.  Hmmm. 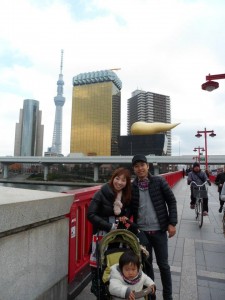 Lunch was the famous Asakusa tendons for us, and udon noodles for Seigo – who really got into it! 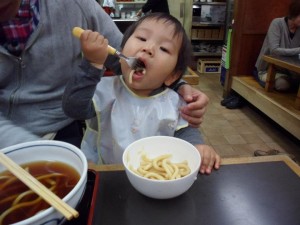 As it started raining, we jumped in a taxi and headed to the Tokyo Edo Museum.  Perfect for a rainy day (or even for a super hot day I would imagine), the museum is well laid out and quiet.  Plenty to see and learn – so much information about the history of the people and samurai of Japan.  Here are Hirosuke and Seigo doing their best to carry me in the traditional viewing box. 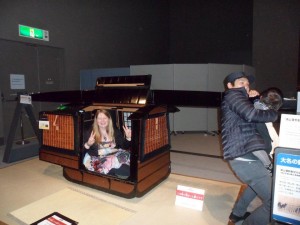 Next stop was a Tokyo cruise, on the Himiko ship.  Designed by Leiji Matsumoto, one of the best renowned Japanese cartoonists (think anime), it’s futuristic and a bit out of this world.  From here we were able to see much of Tokyo from the waterways, including the Tsukiji Fish markets and Rainbow Bridge.  We also saw the theatre that I rode my bike to the day before.  I  also managed to wear Seigo down, and get a bit of a cuddle! 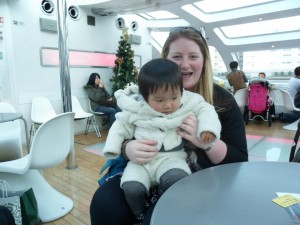 After getting off the boat, we ended up at a shopping centre created mainly for “yummy mummies” and young people.  This is the front of ANA’s “kidzania” – a kids play centre (think Crocs or Lollypops).  It’s a little different however, kids that enter this world will be enrolled into “careers” – they will become firefighters, nurses, shop keepers and more.  It’s basically role play for kids, where kids will even earn a salary that can in turn be used to buy small presents for mum.  Can’t wait till Seigo is old enough to go here and I can tag along! 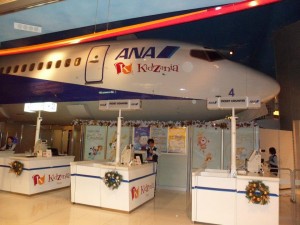 And finally it was time for yakiniku (Japanese style Korean barbeque) for dinner.  We had a wide range of meats and vegetables, all grilled on the table in front of us.  Poor Asako didn’t get much at all – she was too busy keeping Seigo fed. 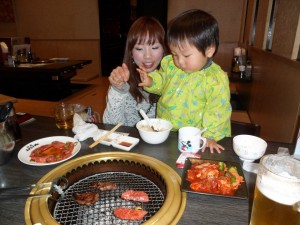 After saying goodbye to Asako, Hirosuke and Seigo, I realised that I was only a few stops from “Gyoza World” – a mysterious and magical place said to contain thousands of styles of gyoza (dumplings).  So even though I was absolutely full from our delicious yakiniku dinner, I stopped by to see what it was about.  And I wasn’t disappointed – dumpling shop upon dumpling shop for as far as you can see.  I managed to nibble on some cheese dumplings (yum!) – next time I need to head back with a few people and an empty stomach!! 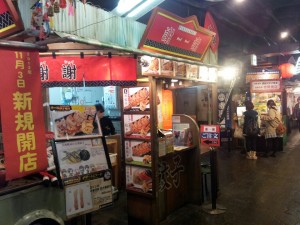 And that’s the end of my time in Tokyo.  I’m currently sitting in the airport, awaiting my flight to Fukuoka, to visit with my host families from when I was a high school exchange student (12 years ago!!)