Well, maybe it’s more like I’m nightmare-ing of a white Christmas. I can tell that all blogs here-on-in (not including Thai ones) will be comparing how cold it now is over here. So to give you an update – we have now reached the ‘it hurts to go outside’ stage. My ears are still ringing from the freezing temps out there – we just walked back from the supermarket, what a stupid thing to do, ow ow ow. Gotta get me some ear muffs.

Since I last wrote – we have been shopping, studying, shopping, doing exams, eating, shopping, Chinese acrobats, shopping, eating, went to Suzhou and shopping. As you can see, shopping is playing a major part in our life here in Shanghai. We have been to the Yuyuan bazaar twice now, the Long Hua Lu Markets 3 times and the Museum Metro (great underground market) 3 times. We have also been to Cyber Mart twice – a fabo place full of electronics, you can get every fake version of the various iPods there for a fraction of the price – some of them may even work. I haven’t bought all that much stuff, due to the planned travels after China, but I’ve still managed to get some good bargains 🙂 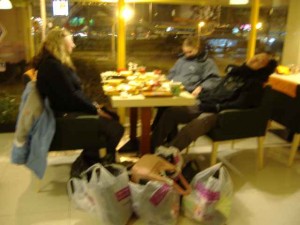 Kylie and Joni & I, exhausted from a day of shopping

We went out on Friday night to celebrate my birthday – spent the night at a Thai restaurant, it was delish. Very fancy, we stood out, this time not because we have blonde hair, but because we look like students (which, of course, we are!). Desert was Haagen Dazs ice cream, yum! 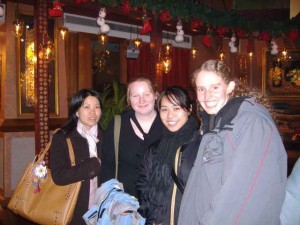 ~~~~~~ ahhhh just checked weather.com – the temp is 1 degree celcius, with a ‘feel temperature’ (temperature based on wind, humidity etc, reflects how cold it actually feels) of -3 degrees celcius – OWWWWW ~~~~~~

We had exams last week, which was full on. Two and a half weeks of learning a semester’s work, and then our oral and written exams immediately after. It was tough trying to retain so much information, but I do feel as though I’m learning more and more each day. I’m even beginning to communicate with shop staff. That said, I’m still having troubles. Mum told me she sent a package a week ago, so I’ve been trying to collect it from the lobby. On the first day I went and asked (in English, it is a big hotel) if they had a package for me. The girl just stared at me – she had no idea what I was on about. The second time I went I asked again (in English) if there was a package for me. Without looking, the receptionist said ‘no’. I asked ‘Do you want to know my room number?’. He said ok, and I said my room number. ‘No’, he replied without even glancing at the desk. On my third try I attempted to use my dodgy Mandarin and was rewarded with a smile and my package. Gotta love China…

We have been on a couple of excursions with the Monash group. Last week we went to Suzhou, a cute little water town, toted as the Chinese ‘Venice’. We went off on a canal tour, and then to the local temple and gardens and generally had a great time. Our tour guide was a crackup – on the way there he told us that the bus driver was number two bus driver in China. ‘Why number two?’, he asked us. ‘Because number one is still in hospital…’ We also went to the Chinese acrobatics the other night – simply amazing. Amongst the various acts, there were the bicycle girls – a group of about 12 girls who rode around stage on the one bike, and the motorbike men – 4 guys who were put in a round cage and rode motorbikes up down and all around.

Other than venturing out shopping and studying, we have just been trying to survive. One of our group – Paulina – left yesterday, and Kylie leaves early tomorrow morning, with others leaving as well. Ling and I are left here for the long haul – we don’t leave until early January. Man, it’s gunna be soooo cold then. I’d better be off – heading back to the room to drink the cold away, and celebrate my birthday! (thanks for the vegemite mum, us aussies had a feast of bread, butter, Vegemite and cheese last night… cept the bread was sweet (all Chinese bread is sweet), the butter was fake, and the cheese was actually cream cheese – oh, and we don’t have a knife, had to use the back of a fork to spread the butter and Vegemite and cut the cheese!)