Where to begin? Once again, I’ve been lazy about updating my blog – my excuse? I’m in holiday mode!!! Last week, we headed off to Mongolia via train – we had ‘soft sleeper’ (first class), but it was an old train – NO AIR CONDITIONING!!! It was horrible! Couldn’t even have the window open (our fan broke on both trips) as the sand from all the deserts comes in, something we didn’t learn until after the first trip… When we arrived in Ulan Baator (Mongolia), after the train trip, the very first thing I wanted was to have a shower. For the past 13 hours, there had been sand and dust slowly pouring into my hair all night. Alas, there was to be no shower for a very very long time…

We wandered into town (had no map, and didn’t understand enough to know what to pay for a taxi, so we just guessed which way to go – my way was the right way in the end!)… After walking about for a couple of hours, we got some directions to where our hostel was supposed to be, and headed that direction (a good 1.5km away). Once there, we still couldn’t find it. Queried at a supermarket, where all the girls went out of their way to help us (they spoke no English, I spoke no Mongolian, we communicated through gestures). Eventually, one of the girls took us to a telephone shop to call the hostel (I had the number written down in my diary). Turns out the number had been disconnected. Hmm. So we found an internet cafe – and after about half an hour of searching, we found that the hostel had moved and not updated it’s address. Off we tumbled again… We never did find the hostel, at about 11.30pm (we had arrived in town at about 8am) we found a hotel for $25 a night and decided it would do – the manager didn’t speak any English, but was very nice, and we collapsed into bed, but not before jumping in the shower and discovering… THERE WAS NO HOT WATER!!! Not only that, but the water was incredibly cold, middle of winter Mongolian type cold (ok, maybe not that cold, the water probably freezes in the middle of winter, but close enough). I had a 3 second sponge shower, then attempted to wash my hair – my head still hurts thinking about that cold water. We ended up staying at the hotel for all of our trip – it was cheap, the people were friendly, and we figured we’d have cold showers no matter what hostel/hotel we choose. 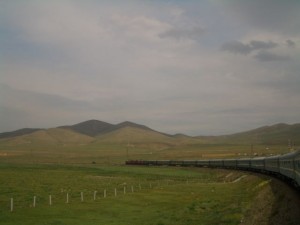 We spent our days wandering Ulan Baator and marveling at how nice and friendly the people were. Most people were willing to help us find things and were happy to help – despite the desperate lack of a common language. The weather was deliciously cool (coming from hot Beijing), although the sun was nice and strong. We were pleasantly surprised to find that Mongolian ‘supermarkets’ (often just convenience store size) stock many luxury items that Chinese supermarkets don’t, at great prices. Chocolate yogo’s and nutella were the top of Matt’s list, whilst I was in love with the ‘bounty’ chocolate bars and REAL (non-sweet) bread. Yum. Seriously lacking was something we thought would be in abundance – cheese. Turns out we were just looking in the wrong places, and it wasn’t the type of cheese we were expecting, so we didn’t notice it. We also trooped out to the black market – a huge market on the edge of town, selling absolutly everything, from clothing to goats milk, to horse rugs and high heels. Plenty of things to see and people to watch – getting back was harder than anticipated when we realised that we had no idea where any of the mini-busses were going and would have to rely on a taxi driver who spoke no english. Matt saved the day with a sketch of a horse, indicating the statue of a horse in the middle of town. Our taxi driver figured it out straight away and off we went. 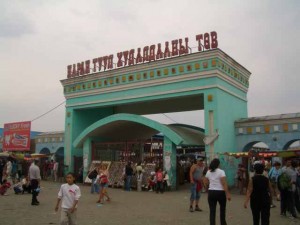 The journey back wasn’t as easy our trip there, but it was an experience none-the-less. Instead of booking a train direct from Ulan Baator to Beijing (which would have been expensive, and probably sold out anyway), we caught an overnight train to Zamyn Uud (the Mongolian side of the border). The train itself was nothing special, no fan, no airconditioning, but we did get free cups of tea! We also made friends with a Mongolian guy on his way to visit his son and wife in Singapore – a friendship that turned out to be very handy. Once in Zamyn Uud, we (with the help of our new friend) caught an old russian jeep to cross the border. Once again, I found that being a foreign female helped me – Matt was squished in the back with about four or five other guys, while I had the front to myself! The jeep drove us to the border, where we waited in line for about an hour and a half. Although everyone jumped out of the jeep and wandering around, I was happy to stay in (the sun was incredibly strong, I’m trying so hard not to get burnt) and chat to the driver instead. As the driver spoke no English or Mandarin, and I spoke no Mongolian, all of our conversation was done through gestures. After exhausting my possible topics of conversation (i.e. “I’m tired” and “It’s hot”), the drive got sick of me, and made his younger companion drive while he had a cigarette. Lucky driver #2 also got to chat with me about the weather and my lack of sleep…

Eventually we made it over the border and into Erlian (the Chinese side of the border). Saying bye to our new friend at the bus station (he was going to catch a bus to Beijing – we thought he was crazy, a bus for 10 hours? No thanks!), we headed to the train station. Only to discover that it was a Chinese Holiday (‘Lovers Day’) and no trains were running. Back to the bus station we headed, where we met up with our friend again, and bought tickets for the 10 hour (which was, in reality, 13 hours) sleeper bus to Beijing. After lunch with our Mongolian friend, we boarded the bus to discover that it had no seats – instead, it was full of bunk beds! Reasonablly comfortable (for the average not-tall person), they allowed us (well, me anyway – Matt belongs to the tall category) to get a bit of rest on the trip to Beijing. Arrival in Beijing was pleasant, we now know this city, so getting a taxi was relatively easy, and we were able to grab some McD’s for brekky (it was 6am!) before stumbling into bed… 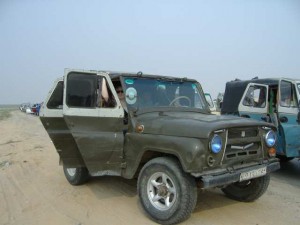 Me in the old russian jeep

Since our return, we’ve been lazying about and attempting to organise a visa extension for Matt. Many dramas (laws changed on August 1st regarding extensions, making it more difficult), but it appears the extension is now under way. Trains are books, flights are booked, we are leaving Beijing for Shanghai next Friday – yey! Now to get all the last minute shopping done and see all the places I forgot to visit… In between all this, we are still finding ways to truly experience the Chinese culture – Last night we spent the night at a hairdressers, where we all got our hair cut and washed for only 15 yuan (a bit over $2). And no, it wasn’t me and the girls – it was me and the boys who thought up this fabulous way to spend an evening! After the hairdressers, we toddled off to an internet cafe that was packed, where we spent a good two hours playing computer games (Battlefield and other such gun-toting games) with the rest of the under-25 male Chinese population. An interesting night to say the least.

China is getting into gear for the olympics, some-thing we are reminded over and over again each day. On August 8th, we went to the ‘pre-versary’ of the 2008 Olympic Games at Tianamen Square – the 365 day countdown has began! The official theme song ‘We are ready’ was released (you can preview this amazing song here), and advertising can be seen all over the television, on buses, buildings, at McD’s, on billboards – everywhere! Perhaps my favourite television add is one which features a number of smiling people doing ‘good deeds’, such as stopping for pedestrians at a pedestrian crossing and holding a lift door open for some-one – it seems these adds are trying to ‘train’ the population as to how to behave for the olympics? An amusing ad none-the-less.

And so, we are left with the task of packing up the apartment (ooh, that’s right, need another suitcase!) and getting ourselves down to Shanghai, where we’ll be for a few days, before Hong Kong, and then home! Hope all is well, xoxo 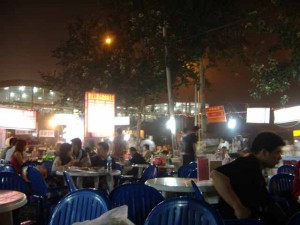 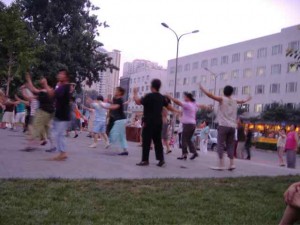