I had organised for a 2 day “package” of Green Island, which included the taxi and ferry rides, accommodation, scooter hire and a snorkeling trip. Jack picked me up from the ferry terminal and set off towards his hotel, giving me a quick tour on the way. Green Island only has one main road that circles the island, and takes about an hour and a half on a slow scooter ride. We passed the main attractions – the airport (they make a killing, as most people come by boat, and can’t stomach the thought of the return and buy last minute flights), the old prison (very interesting history), the new prison (it’s still a prison, so don’t go in and try to take photos) and “downtown” ( a strip of about 10 shops or so).

Jack set me up with a room (absolutely magnificent room with beautiful dark teak floors and furniture) and showed me my scooter. He was more than a little worried when he found out I had only ridden a few times, and made me practice a few times in front of him, but I must of passed for he let me take the scooter anyway. 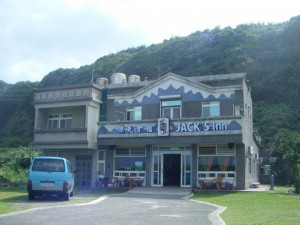 Jack's Inn, the boutique hotel that I stayed at whilst on Green Island.

I ended up at the BBQ joint opposite the hotel for dinner. Furtively looking around, I copied everyone else as we chose our meats and veggies from the fridges and barbecued them ourselves. Just as I was finishing up, two girls from one of the other tables came over and asked me to join them. I joined their party and we had a great time eating, drinking, singing karaoke and playing UNO (which they were delighted to find out works the same in Australia, including Laura’s crazy rules!) The group turned out to be Taiwanese and Hong King students from Tainan – students of what I still have no idea! 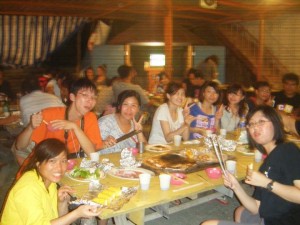 Our group at the BBQ join

They invited me to head to the hot springs with them, so we jumped on our scooters (me still trying to get used to mine – this lot has been on scooters since they were tiny) and headed off. A couple of kilometers up the road, we stopped (in the middle of the road, on a dark and windy area) and one of the guys pulled a torch out of his pocket. Jumping off his scooter, he headed to the side of the road and started looking in the trees. Looking closer, I noticed this dude was much older than the rest of the group, who followed him over. Turns out we were on a nightime wildlife tour (I missed that somehow) and he was pointing out some crazy big insects. He continued with us for a while, pointing out deer and water buffaloed and whatnot before disappearing and us heading onto the hot springs. 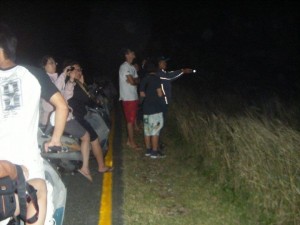 Look, it's a deer

The hot springs were fun – one of only three in the world, they use salt water instead of spring water. Various temperatures, from almost freezing to about 42degrees. Unlike Japanese onsens, it is mixed bathing, and swimwear is worn. We had a great night, and my Taiwanese friends returned me to my hotel before continuing onto their dorm.

Chilling at the hot springs at midnight

The following day I was up early for my snorkeling tour. The weather had changed and was no longer still and sunny, it was now windy and rainy. Still, off to the snorkeling shop I went. My guide fitted me up with a wetsuit (I was the only one on this trip), wetsuit boots and a lifejacket. I’ve been snorkeling a fair few times before, but I’ve never worn a lifejacket and I’ve always used flippers. I attempted to say I didn’t need the lifejacket, but he wouldn’t have any of that. We jumped on our scooters and headed around the corner to the beach, where he handed me a rubber ring and a mask and snorkel?? After walking a few meters out, he instructed me to lie on the rubber ring – and out my face in the water. He then proceeded to put his flippers, and tow me around to see everything! I’ve since seen groups of 3,4 and even up to 8 people being towed around by a single guide – the lazy way to snorkel indeed! Certainly not what I’m used to, but a fun experience nonetheless. Bonus that the sites under the water were deceptively beautiful, huge coral reefs and a crazy neon colored fish, and I didn’t even remotely have a fear of being sunburnt. 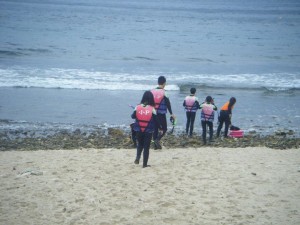 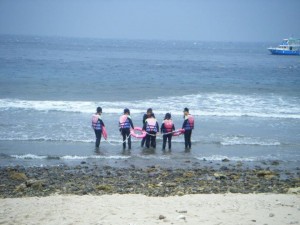 Getting their safety rings 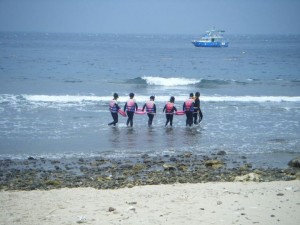 Getting ready to "jump in" 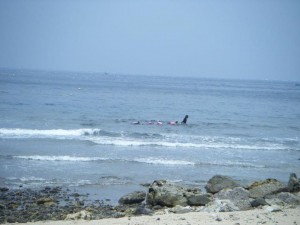 And the leader leads the way!

The rest of my time on the island was spent riding the scooter around – once again I’ve fallen in love with scooters and am trying to figure out how practical they would be back home. This morning I spent an hour or so by the beach, patting a friendly lone golden retriever and contemplating the trip back. 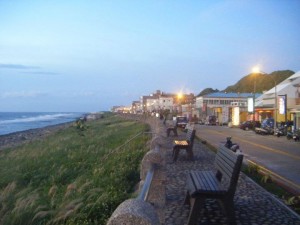 Waiting for Jack to take me down to the ferry terminal, I met the two Europeans staying at the same hotel, who were due to head back on the boat with me. They didn’t have as good a trip as I on the way over, and begged me to share my stash of “miracle drugs”. A little apprehensive, one of them took a photo of the Chinese-only bottle, declaring that at least this way he had “something to show the emergency department”!

We had an uneventful return to the mainland, whether due to the drugs or a better crossing, I’m not sure. They did tell me a funny story about the island though – this morning they were riding their scooters around, when they came across a lone golden retriever in the middle of no-where (“I know that dog!”, I said). The first guy scootered around it, the second stopped just before it. The dog looked up and him, as if saying, ‘well, where have you been?!’ and proceeded to jump onto the scooter! Apparently the expression on Ari’s face was priceless – and he tried to shoo the dog off the scooter, to no avail. Appears the dog has been riding scooters for a lot longer than Ari, and managed to stay on as he took corners at crazy speeds to push him off. He eventually got off when he was ready to, where I must of met him only half an hour later!

I’m now in Hualien – I’ve booked my tour of Tarako Gorge for tomorrow morning and have got a load of washing on. Thankfully it’s a bit cooler here, as I’m wearing only my leggings and my thick jacket as everything else is in the washing machine – fingers crossed everything dries before I pack up tomorrow (but it can’t be as bad as Alex the Austrian, who is jumping on a 20 hour flight tomorrow morning with a backpack full of wet diving gear, ugh).