I woke up with an odd feeling – I have never been overseas and not had that nights accommodation booked. It was kinda scary and truly exhilarating. After heading to the train station and organizing a train to Kaohsiung (pronounced “gaoshiung”) I sat down to ring around hostels. The actual process of booking a train ticket was extremely simple – the staff at the station spoke English, and even told me which platform to board the train from. I found a hostel that sounded good, and booked it with the girl over the phone. 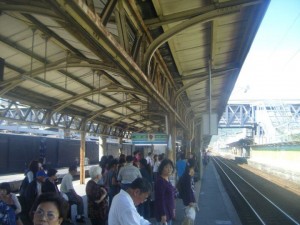 Patiently waiting for the train in Taipei

Train travel in Taiwan is another mix between china and Japan. Not quite as “high class” as Japan, but certainly up there. Trains are very clean and comfortable with stacks of legroom, and a stewardess roams around with a food trolley. There are shelves overhead for smaller luggage and spots about the carriage for larger items Seating is assigned, but it’s common to find someone in your seat – passengers who haven’t booked an assigned seat will sit in any free one, but will move quickly if you’re standing there looking at your ticket and the seat. Announcements are made in Mandarin, Taiwanese, Hakka (local dialect) and English, although the ticket also says the time the train will stop, so you have an idea of when you’ll be arriving. You can book tickets at the window, or at larger stations there are bilingual computer terminals that also let you search, book and pay for tickets.

At Kaohsiung I found an interesting shop called “carton king” – the entire shop was full of packs of DIY cardboard models, including an almost-life size train! I transferred to the MRT to head to my hostel, stopping at Formosa Boulevard. I had scribbled a note in my diary saying that I wanted to stop there, but completely forgot about it until I exited the MRT. Walking into the “dome of light”, you are confronted with an amazing stained lass ceiling showing off beautiful colours and patterns. Worth checking out if you’re in the area. 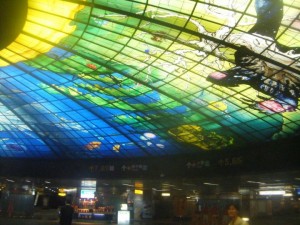 My hostel was simple to get to, and I was warmly greeted by the manager. It has only been open a few months, and they are still setting up some of the rooms. Great location, cute “rooftop bar” and a lovely big table to sit around and chat with other travelers. The manager and another guest pointed out some things for me to do the following day, and told me which night markets to head to in Khaosiung.

The first night market was the Liouhe Tourist Market, literally around the corner from the hostel. Definetly a tourist attraction, there were lots of “yellow hat” mainland tourist groups getting around. Regardless, the food was fantastic and cheap too (TWD $4 per Shanghai dumpling). There was a stand that had a line a mile long every time I went past – I eventually hung around to figure it out. It was a famous juice stand, there were newspaper clippings and photos of the owner standing with famous locals and international artists. I lined up, and was at a loss what to ask for, as there wasn’t an English menu to be found. I just asked for “whatever is number one” and was rewarded with a local favourite: papaya milk. Yum! 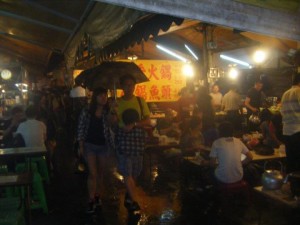 One of Khaosiung's night markets - this one is considered the "locals" night market, with plenty to see and eat.

The second night market was the Rueifeng Night Market, accessed from exit 1 of the Kaohsiung Arena MRT station. This market still had plenty of tourists, but more locals as well. Food was abundant, cheap and delicious (New York Hot Dog style tofu stick anyone? – I’ve now discovered that this was the infamous “stinky tofu”, not. Ad!) and there was a selection of fashion shopping as well as amusement games and massages. Taiwan is an interesting country – it is illegal to smoke in public in most areas, littering is a crime, and there certainly isn’t a lot of rubbish kicking around. Eating in public (ie walking along and eating) is a no-no, but night markets are a different story – it’s all about the food! 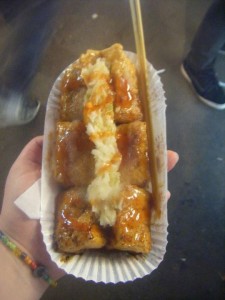 When I started looking a little closer, I noticed that little dogs are everywhere. If you’re ever in Taiwan, assume that every women carrying a large handbag (and indeed men too) are harboring a small pup – there’s a fair chance they are! In fact, I’ve been sitting next a girl on a train for the past two hours, and have just noticed she has a small dog in her handbag! 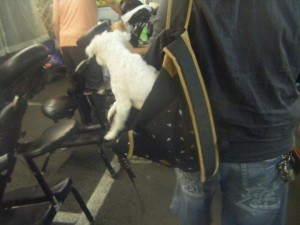 Puppies all over the place in Taiwan - this is at one of the many night markets, his girlfriend had a pink poodle

My trip to Taiwan has been a momentous one for my traveling credentials – for the first time ever, I have travelled with only carryon luggage (that’s for a 3 country trip!). It’s also the first time I have travelled without a planned itinerary – in the past I have booked all or most of my hotels, and known how I was getting from a to b. Not so on this trip! I had a rough idea of some places that sounded interesting, and I booked the first nights accommodation, but the rest was up in the air when I boarded my flight to Taipei.

A quick layover in Hong Kong was extended when my next plane was delayed, and the gate changed from one end of the airport to the other. But no matter, we were soon up in the air again. Arrival into Taipei was surprising – coming out of the arrivals hall I was greater by a mass of faces, and not one pushing and screaming “taxiiiiiii”. Much of my trip was like this – you hear the Chinese being spoken and see the signs everywhere, but then notice that no, people aren’t trying to get you to buy their products or no, people aren’t trying to scam you, a bit hard to get used to!

At the airport I quickly and easily organised a sim card and a bus to town. My hotel was easy to find and easy to check into. Exhausted from travel, I wandered around till I found an ATM that would accept my MasterCard (luckily I had bought some TWD in Melbourne). Grabbed some 7/11 food for dinner (an amusing mix of Japanese and Chinese konbini foods) and crashed for the night. 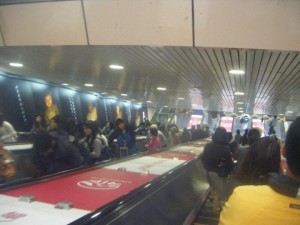 At this stage I was still considering just getting a tour package, and have someone organise my travels for me, so the next day I set off for one of the travel agents in town. Navigating the metro was simple (similar reusable token system as Bangkok), and using google maps on my phone (best invention ever!) I quickly found the travel agent. I was able to organise a tour for that night to see one of the markets and do Mongolian BBQ, but unfortunately there was only one tour running that week. It wasn’t really what I wanted to do, so I left it for now.

I wandered around the town for the rest of the day, until the taxi picked me up for my night tour. We went and collected another girl for the tour before meeting up with the “big bus”. A total of 6 on the bus, we had 2 Australians, 2 Japanese, a French and an Italian in our group. Most had been in Taiwan for a few days at least and were all due to fly out in a day or so. Our first stop was Mongolian barbeque – once again proving that Mongolian/Korean BBQ has very different meanings in different parts of the world. Here, we lined up and chose our choice of thin (raw) meats, vegetables and sauces. Into a bowl they went, and then were handed to the chefs, who fried them up on the spot for us. There was also a selection of salads, fruits and drinks. The middle of the table had a bubbling pot of water that was available to be used for shabu-shabu style food as well. The restaurant appeared to be catering purely towards bus groups, and the food was just mediocre, but the experience was amazing! 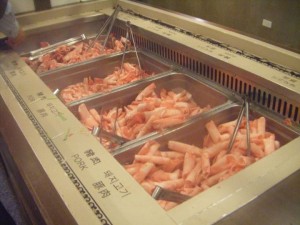 Our next stop was the Snake Alley street market, culminating in the Long Shan Temple. To be honest, if I had of realised the street market we were going to was Snake Alley, I probably wouldn’t have done the tour. Snake Alley is known for its shops selling snake blood – they cut and bleed the snake in front of you, and then you can do a shot of this lovely concoction. HOWEVER I saw none of this – we arrived in the middle of a huge street festival, celebrating the goddess of the sea. There were people everywhere, and men dressed in scary devil costumes. Our poor guide was terrified he would lose us (he said when he has a group of 20 or 30 it is horrible), but we had a brilliant time, weaving in and out of the procession. We beat them to the temple and had a quick look around before attempting to find our bus again. 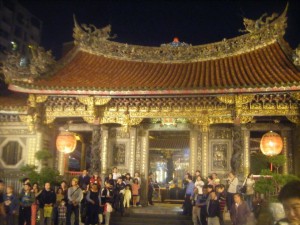 Taipei Longshan Temple, all lit up for the street festival

Whilst we were up Taipei 101, I rang around and tried to book a tour to Kenting for the following day, but I was laughed at and told everything was full, so I’ve decided to catch a train and do it myself. My tour mates were very apprehensive about this (they had all done 3 or more of the tours), which in turn made me a little apprehensive, but with no other options, that’s what I’ll be doing tomorrow!