Well well well, it’s been a hectic couple of weeks. Have been to a million and one temples, forts, castles and mosques. We’ve been touring around the Indian state of Rajasthan, one of the most popular tourist destinations in India. We’ve seen many many beautiful Jain temples, made from marble, very cool on a hot summers day. Of course all the temples have there share of monkeys hanging around. We visited the Amber fort in Jaipur, which was quite impressive. To get to the entrance many people ride elephants (we opted not to, as we had already done the elephant thing in Thailand). Anyway, just getting to the entrance was a feat in itself, walking in between the massive elephants wandering along.

Whilst we were in Udaipur we didnt just go to the standard temples and forts, we also went to Shilpgram, a small crafts village. While there the local girls taught us to dance in traditional Indian style, and we taught them a few western moves!!! They were most impressed with my hair, just as we were impressed with their outfits! 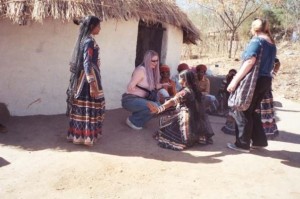 We’ve still got Krish driving us around everywhere, thank god we didnt attempt to drive ourselves!!! In a standard day we do about 250 kilometres, which takes about 5 hours, if we’re lucky. Some of the things Krish has to deal with include camels loaded with huge amounts of hay, tractors plugging along with mountains of people in the back, children running across the roads without looking twice, goats, busses with people hanging off the sides, motorbikes with entire families (we’re talking 5 or 6 people) and of course the cows. The other day we were stopped by a herd of sheep, the women (all dressed in their sarees) were pushing them along. At the back of the pack was a small group of donkeys, perhaps 10 or 12 of them. The donkeys all had saddle bags on, with 3 or 4 lambs poking their heads out of the top of each one!

Prices would be really inexpensive here, if we weren’t eating at resturants every night. Krish is convinced that we’ll die or be harrassed if we step out with the general public, so its strictly hotel resturants for us. He said the other day that we might be able to go to McDonalds later. Hmmm. But to give you an idea, a bottle of pepsi costs 7 rupees, thats under 30 cents. Water is our biggest expense, we go through about 6 or 7 bottles a day (even more if the days temples involve climbing millions of steps!) Food is fantastic though, we have discovered a dish called paneer butter masala, its basically vegetarian butter chicken, with cottage cheese instead of chicken. Visiting the food markets is really interesting, so many different colours and smells, fruit and monkeys everywhere!

Something that has really surprised me is all the women wearing traditional dress. It is very uncommon to see a woman wearing western clothing, the saree has to be one of the most beautiful costumes. The women wear many many colours, often depending on what region you’re in. Bright oranges, pinks, yellows, greens, nothing is too strong! Tash and I had punjabi suits made, so we can *attempt* to fit in, they’re great, really comfy.

Well, better run, about to go sneak out of the hotel to find some real food. Hopefully our driver hasn’t got someone watching the door (he’s done it before!)