We’ve been in Beijing for *almost* a week now, and its amazing. So different to both India and Thailand… To start with, the flight(s) was hell. It took us 48 hours to get from Delhi to Beijing, which, if you were to fly direct would normally take about 6 hours. Our plane went from Delhi to Dubai, then Dubai to Hong Kong (with an hour stopover in Bangkok, something we didnt know about!). In Hong Kong we had a 10 hour stopover. We decided it wasnt worth finding a hotel, so we slept in the airport, highly recommended, very quiet, safe and comfortable airport!!! Anyway, woke up at 5.30am and checked in for the remainder of the flight, Hong Kong to Beijing. Arriving in Beijing was fantastic. We cautiously stepped out of the airport, expecting to be swamped by taxi drivers wanting to take us into the city for huge amounts, but there were only 7 or 8 of them. And, better yet, after telling them ‘no’ only twice, they backed off. Unheard of in Delhi… Instead of taking their taxi’s (they were asking for 200-300 yuan) we caught the bus and subway (about 50 yuan altogether).

Our hostel is fantastic. Right in the middle of town, walking distance to most things, and the subway is also really close, so if we cant walk there we can catch the subway. Many many international travellers here, all with very interesting travelling tales to tell. There is one guy here from the U.S., who is travelling the world, without flying. He caught a cargo ship from California to Singapore and is catching the train from China through Russia to Europe! We are sharing a room with a woman from Seattle, nice to hear some different opinions and ideas about what we are experiencing. The hostel has a cute little bar/dvd room where we all hang out, both dvds and beer are the cheapest things to buy over here, so u can imagine what we spend our evenings!!! A bottle of beer (big, about twice the size of a stubbie) costs under AUD$1 (I’m told its slightly expensive here!!!) DVD’s are about $1.50, I’ve already brought a heap!

Everyone is really friendly and ready to help. Not many people speak English though, which is proving to be difficult. The hardest thing is finding food for Tash, who’s vegetarian. We’re getting really good at pointing and gesturing and using sign language, so we should get by. This morning we wandered onto the street to find breakfast, we ended up with a long donutty type pastry and a spring onion pancake, both from the street vendors, cost us a total of 20 cents. Food in general is awesome, big change from the Indian food. Nice to be eating beef again. The other night we went to a night market, which sold lots of different foods, all on sticks. I got gyoza (fried dumplings) and Tash got fried strawberries covered in toffee on a stick. Yum. They had lots of other things tough, like grasshoppers on a stick, snake on a stick, etc etc. Am going to try them next time… really!!!

We’ve been seeing all the sites of Beijing, our first day of sightseeing took us to Tiananmen Square and the Forbidden city. So many people flying kites in Tiananmen, we’ve been really tempted to buy some, an English guy went kite flying, thought it was great fun! The Forbidden city was really interesting, its the largest cluster of ancient buildings in China, home to two dynasties of emperors, the Ming and the Qing. The area was set up as a walled city, so that the emperors and all their families didnt hav to leave unless absolutley neccessary. It’s called the Forbidden City becaus it was off limits to visiters for 500 years, the buildings are absolutley awesome! Yesterday we climbed the Great Wall, we even have the T-Shirts to prove it!!! The climb was so hard, just up and up and up. My legs are screaming at me today! But we made it, the view from the top was pretty good, you could see the wall weaving up and down all the mountains. Back down at the bottom of the mountain we were ‘attacked’ by all the vendors who desperatly wanted to sell their merchandise, we brought some shirts, but managed to dodge everything else. We also went to Kung Fu the other night, which was interesting. It was more like a play, told the story of a young boy going through all his training. I had an American guy next to me, he wasn’t very interested, until they starting breaking boards over their heads, then he sat up straight in his chair and didnt move until the end of the show, after which he could stop talking bout how cool it was!

Weather is rather cold, it snowed in the mountains yesterday, we’re wearing ALL of our warm clothing. Getting ready to move onto Xi’an, to see the terricotta warriors. Its about a 13 hour train trip, so we really have to push ourselves to go! But it should be warmer as we go down south, which will be good. Hope all is well with everyone, xo BOBS!!! 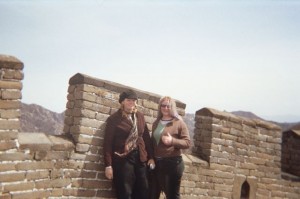 Tash & I at the Great Wall, China