What a fantastic country!!! Arrived in Dublin early in the morning, not really sure what to expect. Booked into my hostel, then set off on one of the open top, hop-on hop-off tours. Highlights of the day included Dublina (a cute little museum aimed at kids, certainly made it easier for me to understand!!), Christ Church and, of course, the Guinness Storehouse. YUM. The storehouse itself was a little disappointing – very manufactured, plastic-y, but the reward was the free pint of Guinness sitting waiting for you at the Gravity bar – right on the very top of the building. However, the amount of beer that was being thrown away would make grown men cry. Tourists were coming in, getting their free beer, having a sip and then leaving it basically UNTOUCHED. These beers were being poured down the sink. I almost had a bit of a sob myself! 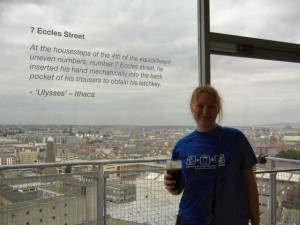 Enjoying a pint of Guinness at the Gravity Bar

After two days in Dublin I caught a [early] bus to Drogheda, to visit the famous Bru na Boinne. Bru na Boinne is an area that has three large pre-pyramid burial tombs (Newgrange, Knowth and Dowth), plus many many smaller ones. They think that the tombs were created between 3500 and 2700 BC. Knowth was particularity interesting because of all the carvings on the stones – the guides were able to speculate what they were about, but no-one really knows. Newgrange is the more famous of the three tombs – we were able to go right inside the tomb, where the guide showed us a re-enactment of what happens on winter solace. The cave-like tomb is in complete darkness for the whole year, except for the 5 days surrounding the shortest day of the year. During these 5 days, at 8.58am, light enters a small ‘window-box’ above the entrance and lights up the tomb. I think the most spectacular of all this is the man-power that it would have taken to create these tombs – huge rocks were moved over large distances to get them into place, amazing to think about when you see the size and number of these rocks.

Next stop was Belfast. I intended to spend two days there, but was so disinhearted after one night that I left straight away. Nothing seemed to be going right and I wasn’t having a good time, so I though ‘Bugger it’, and moved on. Glad I did, because the next place I went, Bushmills, was one of the best hostels I’ve ever stayed at… I had my own room, real beads (not bunks), ensuite… and, best of all, a BATHTUB. The luxury of it all… Spent the day seeing the coast, went to Giants Causeway. Giants Causeway is a section of naturally formed 4- and 6-sided rocks that look just like a pathway leading out to the sea. Legend has it that the giant, Finn MacCool, built it to visit his lady love in Scotland. Also stopped at Carrick-a-rede, a rope bridge strung 30 metres above the pounding ocean over to a tiny island. Whilst it was fun crossing the bridge, it was even better watching people pay 2 euro and then LINE UP just to cross a rope bridge. Guess I did it too, so who’s to judge?! After a day on the north coast, I moved back down to Belfast, where I enjoyed myself a lot more. Took a day tour of the city and found out all the nifty little facts. Like the Titanic was built in the shipyards there. Of course we went through the areas where the Troubles were most prevalent, down past the murals and all the churches and police stations with wire cages over them. Scary but intriguing too. 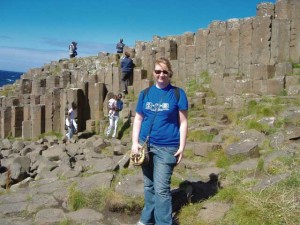 The people of Ireland are incredibly friendly. Almost all will chat to you over a pint, I’ve met a heap of people traveling on my own, locals and fellow travelers alike. Unfortunately, I also seem to be attracting the crazies too. On my trip to Newgrange, I noticed a guy carrying a little stick [wand?] with a feather poking out the end, waving it all over the carved rocks and bowing and whispering to them. This same guy turned into the hostel I was staying at. Turned out he was staying in my room. When we were all sitting around drinking later that night, he kept doing things like waving his feet over the glasses and mumbling to himself… My first night in Belfast, I was sitting in my room chatting to some of the other girls, when a guy walked in and proclaimed we were reading his mind. Turns out he was chatting to one of the girls earlier, he was completely nuts. And then in Bushmills, whilst waiting for the bus, an old guy came and sat next to me and chatted to me in what I think was Gaelic for about half an hour. My bus pulled up, and he said in perfect English, “There’s your bus”. Ahhh! With all this in mind, when I was on the bus on my way out to see Giant’s Ring (Belfast), and an older lady came and sat next me, I was more than a little wary. When she said to me that “I wouldn’t go there, dear, its not a nice place for young ladies to go by themselves, funny people go there”, I decided to take her advice. Had enough of crazies for the moment…