Well, I’ve done it, it’s all over.  6 weeks of intensive study in Shanghai have finally been pulled off – not without the occasional hiccup – and I’m ready to move on…

Last week was the craziest it’s been in Shanghai, beginning with New Years eve.  We started off at an all-you-can-eat steakhouse, which had the best steak I’ve ever eaten, ANYWHERE.  And no, I’m not just saying that because I’m steak deprived, it really was that good.  76 kuai (about $12 AUD) for as much steak and vegies as you can fit – and the best part was, they bring the steak right to your table and carve it up for you.  Delish.  After dinner we roused ourselves from the table (not easy given the fact that we were delirious on meat) and went off to find a cab.  Given this city has more cabs than it does people, you’d think this would be easy enough – not so on New Years Eve.  Eventually we got one (involved our tall foreigners running up and down the main road, I think we scared the other Chinese into thinking we’d mug them if they didn’t let us have the taxi) and headed back to the hotel, to meet up with the other group.

And that’s where the troubles really began.  Jumped into another taxi with a different group of ppls and off we went.  Despite having a Mandarin speaker with us, we ended up at the wrong place.  As my clock struck 11.20pm, and we hadn’t managed to find another taxi, I realised I was going to spend New Years on the corner of a crazy street in Shanghai, with an even crazier group of people, AND I couldn’t see and vodka in sight…  That was enough to spur me into action and off I bounded to find another taxi.  We got one – a dodgy one mind you, but we got there.  Who cares if we pay a dodgy taxi driver $9 Australian instead of $5 – at least I got my vodka!

We walked into our venue for the night – a rave in a Chinese Art Gallery – at 11.50pm and I got my drink in time for the count down.  Small miracles.  The rest of our night was primarily spent at the rave, before heading off to another club and then a different bar.  Arrived in my bed at 9.30am New Years day, not a bad effort. 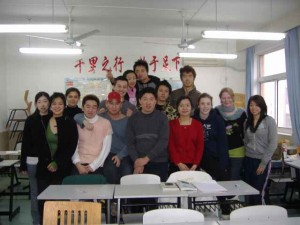 Other than that, my week was crazy, studying like mad for the final exams on Thursday and Friday.  Exams are now over, it’s kinda sad but I’m ready to move on.  Last night (Friday night) was spent celebrating and packing, ready to move on.  You wouldn’t believe how much rubbish I’ve accumulated over the past 7 weeks, it nearly all fits in my bag.  Kinda.  Other than the hour it took to pack my bag, I spent last night farewelling all and attempting not to drink – I have to catch a ferry to Japan in 3 hours.  Despite the determination not to drink, I managed to not get any sleep, which has the same effect, so I’m desperately hoping for good weather on the trip, do not want to be sea sick!

Next blog will be from Japan, woohoo!