Once again, blogs have been few and far between, whoops. It’s been a month of accomplishments with my Japanese – I can now do many things in Japanese that I never before had the ability or courage to do: order pizza delivery over the phone, direct a taxi driver to my apartment, make travel arrangements with a travel agent and more. Most of these things are activities I never even had the opportunity to do in English, in Australia – I live in the sticks, so getting a taxi home, or getting pizza delivered has never been an option. I’m finally beginning to really function over here! 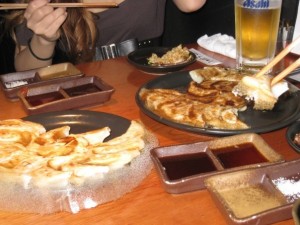 Gyoza at the gyoza restaurant in Hakata

My friend Jen from home has been visiting me for the past two weeks, and it’s been a blast. I’ve taken her around to do plenty of things around Kyushu, including clubbing in Fukuoka (stumbling home at 7am after spending all night at “Happy Cock”, all you can drink for 2000 yen, who can go past that?!), horse races in Saga (where you go not to watch the races in Saga, but to bet on the races in Kyoto!), temples in Dazaifu (students are starting to cram, the temple was packed!), a home party drinking cocktails and eating oden in Kurume (and laughing the night away with crazy cousins!), bali style onsens in Chikushi (Jen’s first onsen!), sand onsens, hostels and “hell valley” in Beppu (natural bubbling colourful pits of sulphur water, reminiscent of what hell may look like), souvenir shopping at the many 100-yen shops in Fukuoka (and then finding a post office that will accept the 100-odd kg of souvenirs that Jen bought!) and shopping and watching movies at Canal City in Fukuoka (New Moon has FINALLY come out in Japan!). 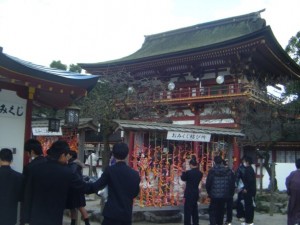 Students tying their fortunes up at Dazaifu

Matt’s headed off on his next adventure – he is now in Taiwan looking for a job, leaving me in Japan all on my own… Never fear, with my newfound pizza (and sushi, curry, hotpot, Korean, Indian etc etc) ordering abilities, I think I should survive. Throw in the attention of my host sister and cousin (I have an accessible apartment in the city, a big bonus on a Saturday night when trains stop at 11:30pm! This Saturday night is the first I haven’t been out till 7am, and it was only because Jen was leaving early Sunday that I was excused!) and my other Japanese friends. 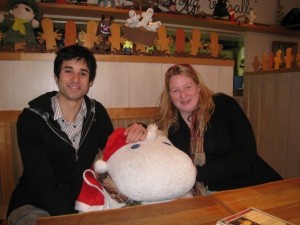 At the Moomin cafe in canal city. If you're lucky, Mr Moomin himself will come and sit at your table to help you drink your gingerbread hot chocolate (which is easily the best hot chocolate I've ever had, and so it should be at $8 a cup).

Now it’s back to work, sorting out my parents itinerary for when they rock up in two weeks time. We’ll be hiring a car (eek!) and traveling a bit of Kyushu before heading to Kyoto & Osaka for a couple a days, and then heading to China on the ferry. Just call me Travel Agent Bobbi!