No-one warned us that Sweden would be COLD. To be honest, we sort of knew it anyway, but choose to ignore it and worry about it when we got here. Our first warning was when we stumbled out of the train station on our way to the hostel, and noticed everyone wearing snow jackets. Our second warning came when we realised that our hostel offered a free sauna. Hmm (fact: in Sweden there is a sauna for every 3 people). Despite the weather (which really isn’t all that cold – after all, it could be snowing), we have been enjoying ourselves in this Scandinavian country. Did you know Pippi Longstockings (in Swedish: Pippi Långstrump) is Swedish? That’s why she has long stockings – to keep warm! 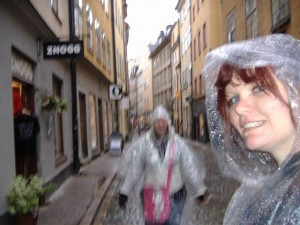 Playing in the rain in Stockholm

We became braver on the second day and decided nothing would stop us. And then it started pouring down with rain. We ended up wandering around town in our ridiculous looking $2-shop plastic bag ponchos. Eventually we found a museum which listed ‘fri’ entry (our language skills are getting much better, I bet you didn’t know I could read Swedish!!!). The museum turned out to be the Royal Armory, which had, amongst other things, the clothing worn by one of the Swedish kings when he was assassinated – blood stains and all. The best bit was when we stumbled across a kids section all about princesses. They had swords to fight with, a frog to kiss and even a colouring-in area. To the amusement of one of the tour groups we sat down and did some great artwork! We also visited Skansen (large open air museum, they have brown bears and elk) and the Vasa Museum (huge ship), which were interesting, although they didn’t provide crayons and play swords. 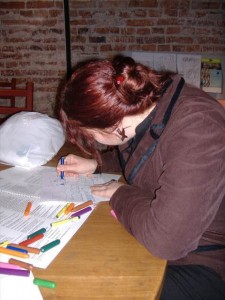 Tash concentrating hard on her picture

Spent a couple of days visiting Sophia, a friend of Tash’s. Sofia is studying in the town of Uppsala, 45 minutes north of Stockholm. She took us to a couple of parties – one in her ‘nation’ and a corridor party. All students of her uni join a ‘nation’ when they start studying at university – the Swedish students join different nations based on what area in Sweden they are from, whilst the international students get to choose which one they’ll join. The nation organises parties, dinners, extra curricular activities, that kind of thing. The corridor party was weird, a bit like what the U.S. TV shows portray college life to be. Everyone goes to a particular hall in one of the student flats (in our case building 9, floor 7), and party in the corridor. Loud music, BYO beers, its like a paddock party back home, just cos we’re in cold Sweden they have to do it inside! Sophia showed us around Uppsala a bit as well, we got to see the ancient burial mounds of the Vikings in Gamla Uppsala. Although I envy the fact that she gets to live here for 6 months, I’m glad its Sophia and not me that’s going to be braving the Scandinavian winter.

Bring on the warm weather – next stop Spain!!!
xoxo ME